Jet Moto 2124 was supposed to be the futuristic followup to the highly underrated Jet Moto games, to be released in Spring 2000. Unfortunately, problems during development, as well as the relatively lackluster sales of Jet Moto 3, resulted in its cancellation.

A ROM of an early test build was acquired by Jet Moto Central and released on January 14th, 2014.

Known in-game as ATLAN_2. This track uses a similar aesthetic as Atlantis, but has a completely different layout. According to developers, this stage was scrapped due to being too difficult for the first stage in the game, and was thus replaced with Atlantis.

Atlantis II can replace Atlantis with the use of the following code:

Known in-game as NEORIO. This track crashes the game when loaded.

An unused trophy for Neo Rio exists in the game's files.

Known in-game as PACIFIC. This track exists as a near-duplicate of Atlantis II with only some minor aesthetic changes. The files are located after Neo Rio, indicating that Atlantis II was to be brought back after being cut with a slight change in its theme before being scrapped again.

Pacific Coast can replace Atlantis with the use of the following code: 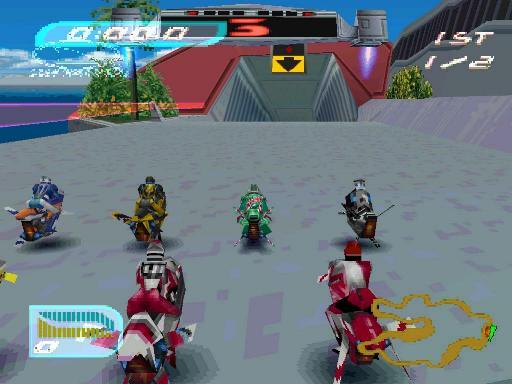 The beginning of the track. Note the different sign compared to Atlantis II. 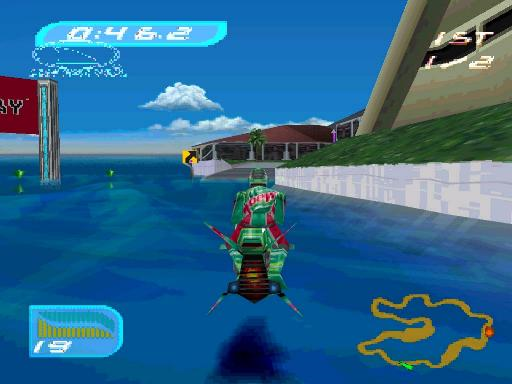 The turn right after the underwater tunnel. 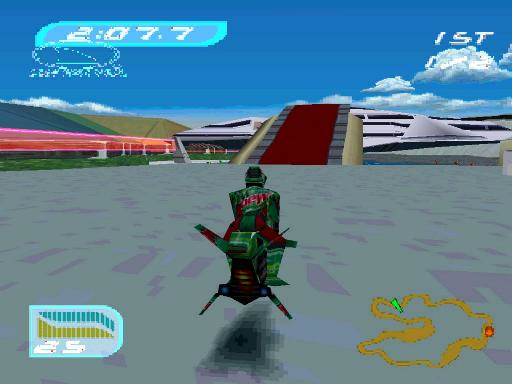 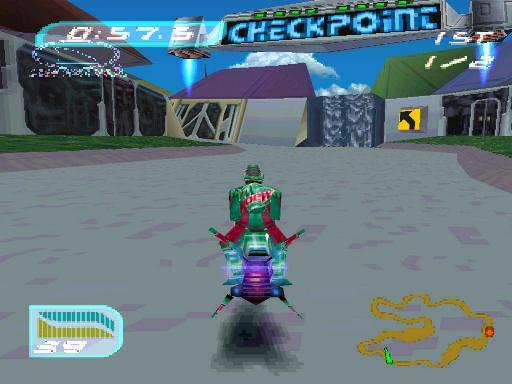 Known in-game as CRYS_COM. This track is a flat plain made up of a grid of various textures.

Test Track can replace Atlantis with the following code: 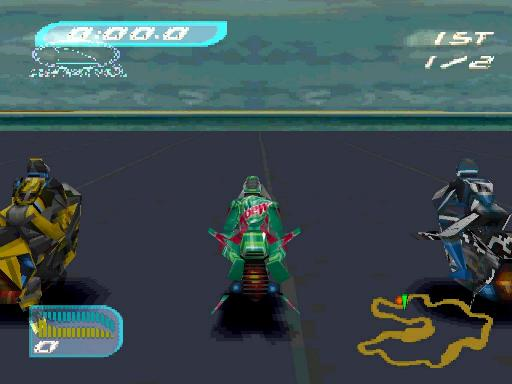 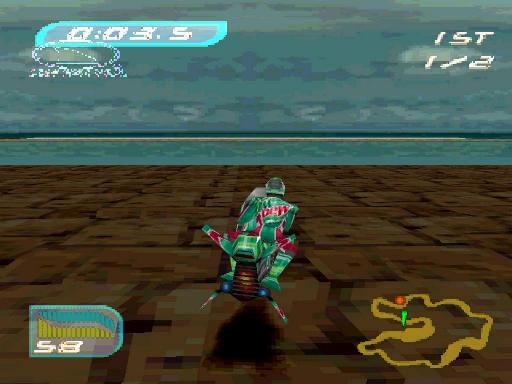 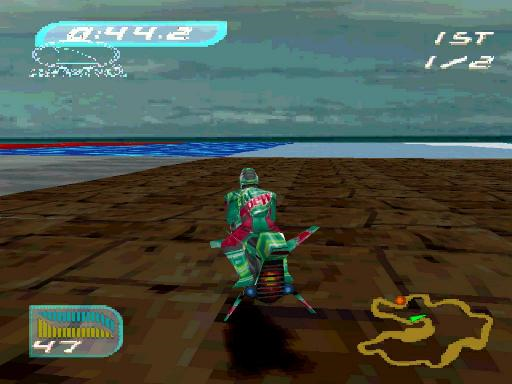 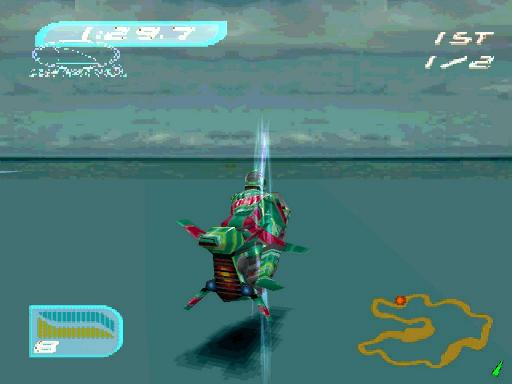 Originally, the game was meant to have 8 hidden characters. The full list of characters as referenced in the game is as follows:

These textures exist for a second pink rider.

These textures exist for an old version of Mortician.

These textures exist for an unused alien rider.

Smiley is fully playable in the game with the following code:

He is difficult to handle and prone to bouncing really high into the air. 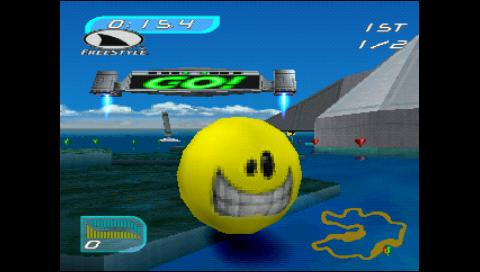 Smiley as it appears in-game. 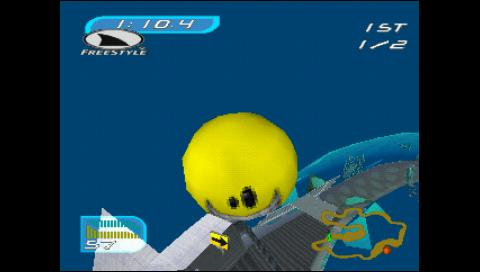 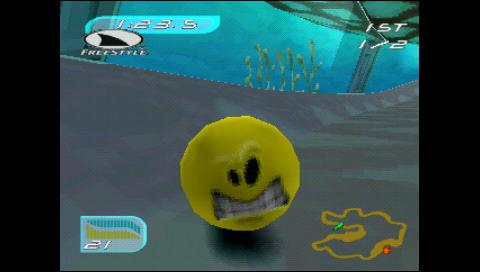 The front side of Smiley.

Another unused playable racer exists within the game's files. This character appears invisible at first, but becomes jet black when first entering a dark area. 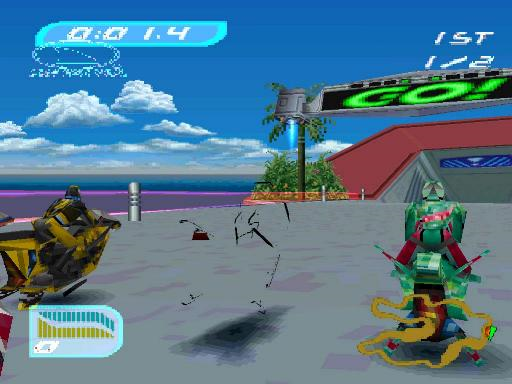 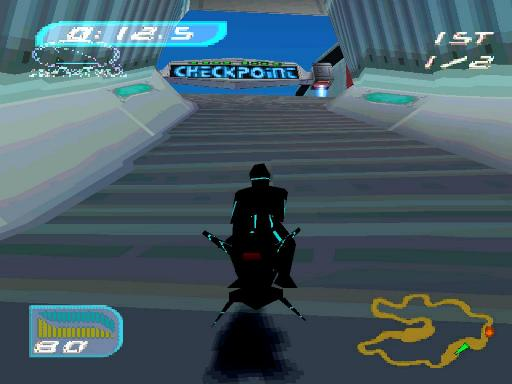 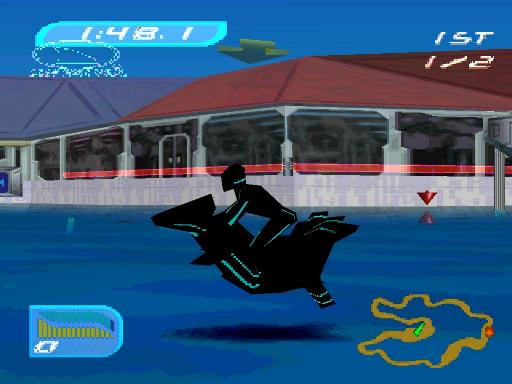 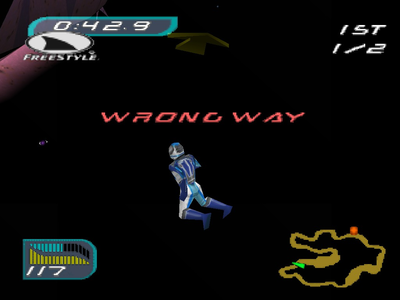 This hidden turbo powerup can be found only by falling under the track on the Phobos stage.

Present near the beginning of the ROM.

Given the unfinished nature of the game, there are a lot of images that go unused here.

A development credit for Sony Interactive Studios America, recycled from 2Xtreme. It was most likely a placeholder for either the 989 Studios logo video or for Pacific Coast Power & Light's own logo.

These screens were meant to be displayed at the end of a demo build of the game.

This screen was meant to be shown when loading stunt mode.

A simple test image, showing a screenshot from Jet Moto 2.

There are also a couple of other unused renders hidden in the game's files. Their intended purpose is unknown.

There are several leftover images from a much earlier build of the game, titled Jet Moto 2125.

These images were used for the title screen. Interestingly, the background is also stored as a separate file, despite the menus coming pre-assembled in the first three images.

These images were used for the options menu. Likewise, there are several elements that are saved separately, despite the pre-assembled menu screen.

A couple of early speedometer designs.

The tracks "Falling" and "Keep Hope Alive" go unused, as they were intended to play on Pacific Coast and Neo Rio, respectively.

Another file in the game's code gives more information about the game's music.

Contained on the disc is MUSIC.H, which contains the following code. Note the inclusion of the unused songs.