Jill of the Jungle: Jill Saves The Prince

Jill Saves The Prince is the third game of the Jill of the Jungle game series. Features Jill's first and only piece of dialog: "Okay".

The second level ("The Village") seems to be derived from Onesimus: A Quest For Freedom. As a result of bad cleanup, the level still contains a wooden house at the top of the level. When the player approaches Paul the Apostle in this house (who is not drawn at all, since there is no sprites for him) a cutscene consisting of four screens will be shown.

In a glitchy manner all the screens (except for the third one) show the prince Jill must save in the last level instead of Paul the Apostle.

After the final screen, the game ends.

This label should be displayed whenever the player is in the hub level but is not used in the game for unknown reason. It has the same artwork as in the first episode. 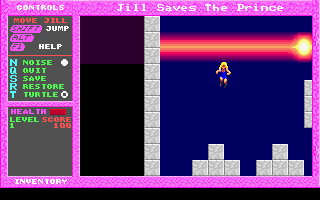 Jill main menu being played as a game level!