Journey to Silius is an NES side-scroller where you shoot intimidating mechanical enemies to avenge the death of your father. It has some of the most rockin' music on the system.

Game Genie code XTUSKTAV (ROM address 1DE4C:EA) activates the game's stage select. A or B changes the starting level, and Start starts the game. Combined with the code TEXINTIA (1DEB7:06), you can jump straight to the final boss by selecting "ENDING[]".

In the European version, XTVSNTAV activates the stage select. When combined with TESSXTIA, "ENDING[]" can be selected. 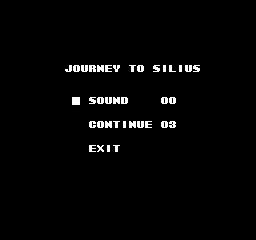 Pressing B 33 times and then START on the title screen will bring up a sound test, as well as the ability to adjust your number of continues.

The game began life as The Terminator, but unfortunately, the original copyright text and some unknown graphics are all that remain from that development period. Note the copyright date of 1989, compared to the final's 1990; there are promo images and video footage from this period as well. The Terminator license would eventually be picked up by Mindscape a couple of years later.

Neither of these tracks can even be accessed in the sound test without a patch code.

Set address 0300 to 0B for this track, which may have either been a cut-scene stinger or an early game over cue.

Set it to 0F for one that could have played after beating the final boss.

The game was released as Rough World on the Famicom and Journey to Silius on the NES. However, the word "Rough" is spelled on the logo with phonetic symbols as [rʌf] instead of normal letters. As a result, a lot of people tend to misinterpret the title as "Raf World", due to the fact that the turned v looks like an uppercase "A".

The options screen for the Famicom version has "Rough" spelled out in normal English but leaves out the "World", likely due to the fact that it was slapped on the game's title late during development and they forgot to update the options screen accordingly.

The US version appears to be based on an earlier build of the game, as evident by the sprites used for the player character, which could be seen in the Japanese previews for the game. In the final Japanese version, Jay McCray's sprites were updated, giving him a full-body armor that now covers his head. The updated sprites ended up being used for the European version as well.