Nintendo’s massive manga cross-over Jump Super Stars has done well enough to warrant a sequel, which has characters from 41 Jump series and got more import-friendly. It later got a partial fan-translation.

The “koma” (panels) in this game are the various battler/assist/stat enhancer characters that can be assembled in a Deck Edit Mode. Some however are unused: they don’t appear in the list of the available komas. Most of them are completely black.

When hacked into the list with the use of Action Replay codes they can be found under the “Other” category, which is otherwise unused. More importantly, any deck using these unused komas is automatically considered illegal regardless of whether it fulfills the normal rules.

Here is a list of some of these koma:

They have black graphics. All of them are 2-case type. 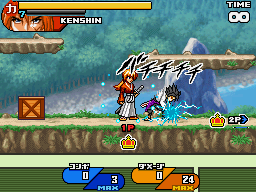 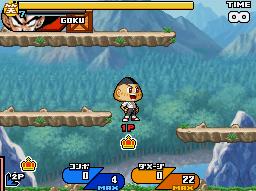 The Komamen, basic characters using the 3 types in the game, are seen in many missions and are even playable in several premade decks. However, they cannot be used in the deck builder normally, and as such their Ally Boost dialogue cannot be seen without cheating.