InGen Town is the fourth level, but it was originally supposed to be the fifth. With Plantation House being scrapped and partially merged with Jungle Road, it was moved up one slot. Originally, it would have ended a little ways after exiting the East Gate and the level "Plains" would have started up. However, with Plains being scrapped, part of the level was merged with the InGen Town. 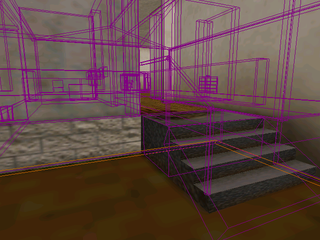 At some point in development, the railing to Wu's stairs was removed. However, it seems the guys at DWI were in such a hurry to meet the deadline that they forgot to remove the collision data. Going by a time frame, the railing's object was removed sometime between Build 96 and the final (which would be build 116). The remnants of the railing can be seen with the BONES cheat. 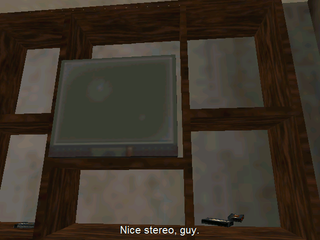 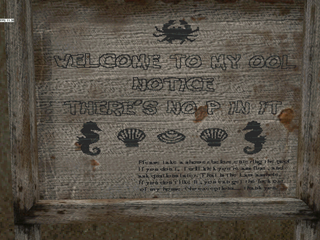 The sign next to Wu's pool in his backyard isn't actually unused. However, the text in the bottom right corner is difficult to read. According to some, it is supposed to read the following: 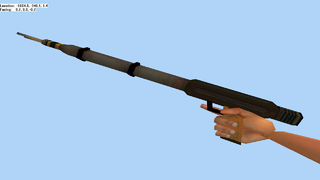 Out of bounds at -1605,-347,2 is an early version of the cattle prod, even earlier than the one found in Build 96. Like Nedry's Mace, this weapon wasn't nerfed by the developers and can actually deal a fair amount of damage.

While not unused, not a lot of people notice this right away while playing (or at all on some occasions if they aren't told about it.) the level. There is a code hidden below the sink in the gas station that can be entered in the console at the Ops Center. The code is House, House, House, Gate, Gate, Lightning Bolt, Data, Lightning Bolt. Entering this code brings up a screen put in by Richard Wyckoff, one of Trespasser's developers who designed most of the puzzles in the Town level. Apparently, by this point, the work on Trespasser was so stressful that Richard decided to express his frustrations in-game. Mounier is Michael Mounier, one of Trespasser's programmers. He probably handled the internal coding for this little Easter egg. 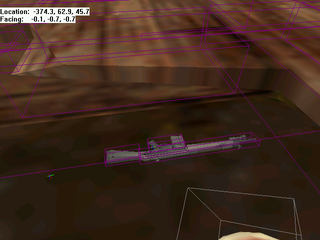 This HK-91 is buried underground in the pit in the middle of the church at -374.3, 62.9, 45.7. It can only be seen with the BONES cheat on. Surprisingly, it's actually possible to grab it by kneeling down and positioning Anne's hand so it just barely touches the handle.

The church itself isn't unused; but according to the 1997 walkthrough, the developers made to plan out the initial ideas for the game, a tree was supposed to go in the pit in the center of the Church. It looks like this was at least partially executed, as not only is there a hole in the floor where it should have gone, but a matching hole in the ceiling can be seen above. Due to the numerous problems faced during development, it's possible that the tree was either cut to reduce stress on the graphics engine or was simply never placed at all. 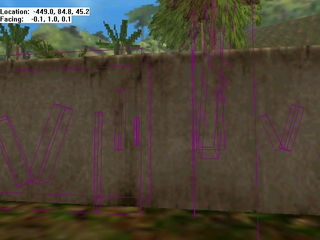 There's a hidden spot in the Town wall at 449.0,84.4,45.2 where the player can slip through the wall. It's easy to see with the BONES cheat on. Slipping through here activates a trigger that sends the player to the Test Scene. This was most likely intentional, since the Secrets.doc that came with the Trespasser Source code actually mentions including a warp to the test scene.

In addition to the voice-over regarding Wu's Stereo in his house, a couple of other voice-overs that were placed too high can also be found throughout the town.

(To see the full quote for each voice-over, move your cursor over the photo.) 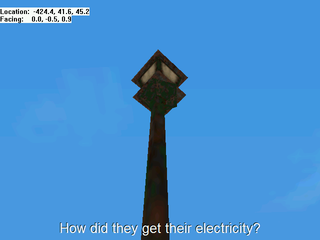 This lamppost found at -424,42,45 has a voice-over at the top of it. It can easily be climbed to by placing a crate or two at its base. 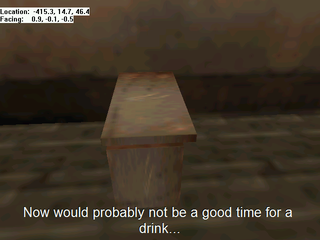 This one is in the Saloon. It can be triggered by climbing on the left bartender counter and jumping. 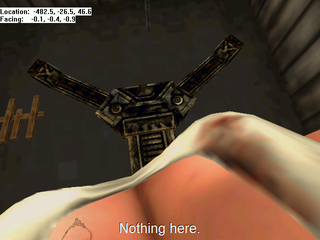 This plays in the gas station garage when jumping on or near the lift. This voice-over is actually mentioned as being planned as a secret in the Secrets.doc that came with the leaked Trespasser source code. Originally, the developers had talked about having the player trigger a switch that would lower this lift, allowing them to hear the voice-over when it rose up. However, this is pretty easy to jump up to. Alternatively, it can be heard by climbing on top of the gas station. 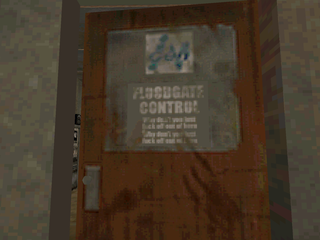 According to certain fans, the door to the Floodgate Control Room has a profane message written on it in text almost too small to be legible, even at high resolutions.

If this is true, the developers probably weren't happy with how things were going with development. 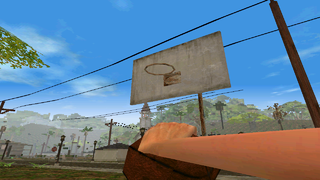 Originally, dunking a ball through either of the hoops would trigger a voice-over acknowledging the achievement. However, the voice-over seemed to have a slight problem: It would repeat itself indefinitely. As a result, in the final version, the triggers for playing this voice-over were simply moved to behind the hoops. With some patience, it is still possible to activate these triggers in the game, but they will repeat over and over again until the level is finished or a save is loaded.

This music track probably would have played when opening the East Gate and accessing the walk to the Plains level entrance.

At some point in the InGen Town level, the player was supposed to encounter an Albertosaurus. Unfortunately, it seems that the Albertosaurus encounter was scrapped.