Industrial Jungle was originally slated as the fourth level, but with the removal of Plantation House, it became the third level. There are several oddities here that suggest major changes in the terrain shortly before release.

The following weapons can be found in odd places throughout the level and are unobtainable due to invisible walls:

Several unused vehicles are located out of bounds. Some are variations of existing ones. Among them is a crushed variation of the motorcycle (at -1225,100,2), a wrecked Jeep with an open door (at -1210,100,2), and a Jeep with a retractable seat (at -1205,100,2) like the ones used by the InGen Hunters in The Lost World. Neither of the Jeeps have physics.

A golf club can be found floating in the air in the level's basement at -1290.204,135.862,1.0753. Much like the Colt, the grip magnets are placed oddly, causing Anne to hold it at a rather painful angle. A cut Anne voice-over reveals that it was intended for the General Store in the InGen Town. 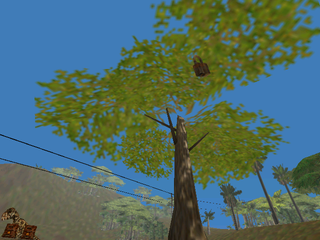 For some strange reason, a lock is floating in the air at 473,195,46. This is actually in the level, clearly visible. It was probably attached to the door of the shack nearby at one point, but the shack was moved and the lock was left hanging. As Build 96 indicates, Industrial Jungle underwent some serious landscaping changes, most likely to accommodate the removal of the Plantation House level. Interestingly, in the E3 and PC Gamer prototypes, this lock is actually just under the terrain indicating it was placed on the ground. It's possible the lock was never intended to be on the door, but on the ground instead or Industrial Jungle underwent another change even earlier.

During development, the dinosaurs were intended to have an emotion system that would let them exhibit various levels of aggression towards Anne. However, once implemented, it was found that the dinosaurs would swing between emotions so rapidly that they would stand still struggling to figure out what to do next. This was solved by simply setting the aggression and hunger levels to max. This solved the issue, but covered up the hard work put into the emotions and made the dinosaurs a lot more single minded and generic. However, the developers missed a few, many of which are in Industrial Jungle. One of the more notable ones can be found at -740,690,35. This one paces back and forth and doesn't really pay much attention to the player.

There are two others later in the level that will walk up and sniff Anne following her around until they become injured, which causes them to become aggressive. These two guys are located at 380.8, 519.5, 87.8. 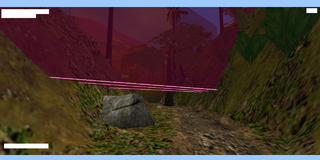 There is a music track at the beginning of the level that is placed too high to be triggered unless you climb on a nearby rock. This is most likely another product of last-minute terrain changes.