The Night Test Scene, while essentially similar to the day Test Scene does have a couple of differences. The most notable one being that the head is missing. Interestingly, the official full game patch doesn't have this level as part of it. Also of note, this level's date of being last modified was September 23rd, 1998. The other levels' last modified dates were in early October, indicating work on it was abandoned after the 23rd. Also, this test scene was only added in Build 99, after Pine Valley was dropped from the game and was abandoned after it was inserted into the game. 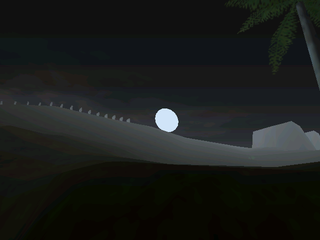 This moon is actually a 2D object put in the sky. There's not much more to say about it other than it being an exclusive to this level. Such a shame. 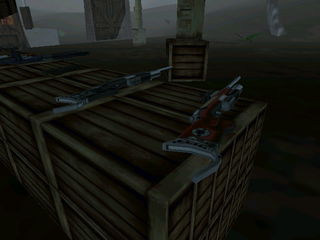 These two rifles are different from the ones in the other Test Level. These are actually prototype versions of them. The toxic version of the Rifle actually makes for an overpowered melee weapon. It can kill dinosaurs just by touching them. They're also found in prototype 96 in the Day Test Scene, Jungle Road's Basement, in InGen Town's Animal Control Room at the Ops Center, and in a few other levels' basements.