The Summit is the final level of the game. Anne finally gets help and makes her way to the Helipad at the very top of Mount Watson where she faces the game's final boss, the Tribe C Alpha Raptor.

Behind the starting position, at the bottom of the elevator, are a skeletal hand and a Desert Eagle that are buried beneath the uneven terrain. This same area is present at the end of Ascent 2 for the end of the level, with the same objects in the same place, but the terrain is even enough that they can be seen and collected.

It seems there was going to be some sort of fusebox puzzle here, but all that remains of it is this case, which can't be reached normally and has no physics. Since the case is attached to the Comm Tower, it may have been used to turn the power on before contacting the rescue team.

A piece of scaffolding is floating in midair outside the play area, but it's not near other basement objects. 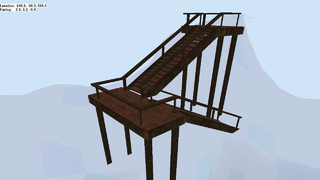