Trespasser's T-Script is the heart and soul of the engine. These scripts help objects, dinosaurs, and triggers work. Because of the rushed development, many went unused. Others were removed due to bugs such as the dinosaur emotions.

Before particles were introduced to the game, there were originally things called "Hit Spangs". Basically, they were 3D objects similar to the gun muzzle flashes from the final that would appear upon a bullet making contact with something. While some code for these remains in the final, they cannot be used. However, with the recently leaked Trespasser source code, it is possible to re-enable them. Some pre-release screenshots show them in action, most famously this one found on the back of the box: 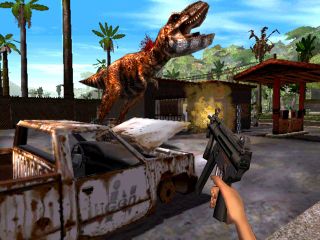 It should be noted that prototype Build 55 uses hitspangs.

A large number of these behaviors were commented out in the source code and others simply didn't get used. The reason why is that if a dinosaur had too many behaviors active at once, it would have abrupt mood swings that would cause it to stand still trying to figure out what to do. As a result, in the retail release, every emotion except Hunger and Anger were lowered to 0. Hunger and Anger were maxed out. This solved the issue, but also made the dinosaurs' goals very single minded. The Emotions also influenced behaviors as can be seen below. The emotions are Fear, Love, Anger, Curiosity, Hunger, Thirst, Pain, and Solidity. The Trespasser CE Executable (which is a source code edit) has an option to enable commented out behaviors.

Pretty much what it describes below. The user jumps and takes a snap at the target while airborne.

This behavior does just that. The user charges with their body physics box and attempts to do damage. It's similar to the ActRam behavior.

As the name would imply, this is the behavior for pain. This behavior is one of the many commented out behaviors. When a dinosaur is injured, it will make a random sound of pain. Most of the dinosaurs in the retail version have this behavior in their T-script values. However, it's commented out, so it makes little difference to have it.

This behavior was also commented out. Basically the dinosaur roars from the distance, usually lifting its head and opening its mouth a bit.

Like ActOuch, this is a T-Script value that most of the Retail dinosaurs have. It's also commented out as well. When a dinosaur dies, it will moan for a bit on the ground. In the case of all carnivores and some herbivores, they'll open their mouth and tilt their head to the side a bit. Presumably, ActDie lasts until the dinosaur hits the "ReallyDie" state. (which is a value that controls the point where their health won't decrease anymore.)

(Source: Andres, with additional research by Rebel, BigRed, Draconisaurus, chronzerg and machf.)
Retrieved from "https://tcrf.net/index.php?title=Jurassic_Park:_Trespasser/T-Script_Stuff&oldid=666514"
Categories:
Cleanup > To do
Subpages