Jurassic Park is a decent platformer for the Genesis. You can play as Dr. Grant, and use weapons to knock down the dinosaurs you face, or play as the Raptor, and destroy everything in your path.

Enter the password NYUKNYUK, and a message saying "Second controller enabled" will appear. With this mode active, the following buttons on the second controller can be pressed: 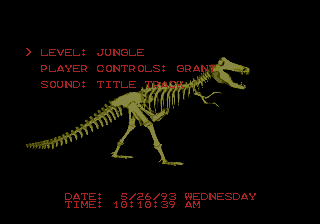 Activate the debug mode, then enter and leave the options' screen. Then, choose "Start" on the main menu, and you'll be taken to the debug menu.

This screen has a T-Rex' skeleton in the background, and the compile date and time on the bottom. Each version has its own date:

In this menu, you can change the following options:

There is some text that hints to the existence of other menus.

There is a little song, named "You Win", that can be heard in the sound test, but it's not used anywhere.

These crudely drawn numbers can be found on the VRAM at the end of the Jungle's tileset. Maybe they're part of an Easter egg?

A quick tidbit; there is a powerup that cannot be accessed in the game. In Grant's Visitor's Center, there are some explosive grenades right under the elevator, but the path to access them is blocked by a pillar. They can be accessed in the prototype, though.