In Jurassic Park Dinosaur Battles, you take on the role of a government agent who has to rescue Harrison Manly's group of Junior Explorers from Isle Sorna (Site B) and stop the evil Ingen scientist Dr. Irene Corts from creating controllable dinosaurs with the experimental DinoVoc, using a DinoVoc stolen from an abandoned lab that belonged to Corts.

The game features an isometric overworld and random RPG-style encounters. It is essentially the same as Jurassic Park Scan Command, minus the need of the barcode scanner to progress. Since it is the same, both games will be mentioned here as the unused content is essentially the same with a few exceptions. Ironically, one of the developers, Richard Wyckoff was also previously involved in the production of a certain other Jurassic Park game.

A lot of this and other content on this page came from the scjp.res file and was ripped with dragon unpacker. 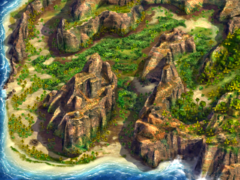 Could this be a lost area or an early version of Area 3? Also, note the dinosaur nest in the southwest portion of the map.

This map seems to either possibly be connected to the Cave in Area 3 where you rescue Kirby, or it's an early version of Area 3. Features a Dinosaur Nest interestingly. The dinosaur nest is actually a separate graphic itself that appears on the map over the location, but this is where you would find it on the map.

It is safe to assume that one map also covers the dinosaur random encounters for certain parts of the map but it is not known at the moment.

Among the related map objects for Area 4 is an unused image of a Camper similar to the one in Area 1. The reason why there's an animation is because map objects are invisible until you reach them, at which point they slowly fade into view. The Area 4 assets also contain a texture for the Camper's 3D model, but it's identical to the Camper's Area 1 texture. The Camper matches up perfectly in Area 4 to a spot usually occupied by not much other than trees. 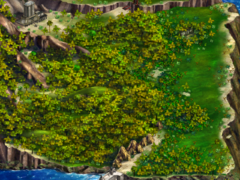 The Camper was apparently located in the northeastern part of the map at one point.

At one point in production, it seems three other dinos were planned to be playable. They are Dilophosaurus, Gallimimus, and Pteranodon. (Okay this last one isn't really a dino, but a flying reptile.) In the final product, all three were cut as playable but do appear in game still. The Dilophosaurus and Gallimimus appear as enemies. The Pteranodon became a key item however and only appears for a brief cutscene to lower the bridge to you to access Area 5 and beat up the Purple Pteranodon guarding it. It is currently unknown how to access the playable versions (if their coding even exists still), but it might be possible to get the skins for the Galli and Dilo in game by swapping out an enemy version's skin. As for the Pteranodon, he's already got his in-game.

The following are sound files that further indicate the Dilo was playable at one point because of the beeps before them which are used for attacks when controlling the dino:

This text also indicates Dilophosaurus was playable at some point.

The Playable Gallimimus doesn't have any sounds, but it does have one unused menu image and a skin that went unused (at least in its original iteration, anyway).

Similar to the Dilo, the Galli also has an unused message for obtaining it.

The Pteranodon is interesting because it's not exactly playable, but not an actual enemy either. There's a small segment at the end of Area 4 where after beating Primo at his lab, the player gets the Pteranodon, kind of like a Key item of sorts. Upon reaching the bridge, the Pteranodon will fly towards and fight the other Pteranodon guarding the bridge and scare it away. Then it lowers the bridge and flies away never to be seen again. The unused menu images indicate that at one point it was planned to have a much larger role than it did in the final.

There's also an unused enemy portrait for the Pteranodon, but that will be posted later on this page.

There are a few enemy variations that didn't get used (or in the case of the Pteranodon, completely as an enemy).

It is possible to modify existing skins and replace them with the unused ones. This video demonstrates what the skins look like in game:

Note: There are links to specific times in the video's description to save time.

Yes, apparently the mouse cursor from Scan Command is still in the scjp.res file.

The Repair Reader button from the options menu apparently also still exists. Though, it is located in the scjp_Loc.res file.

The text for Scan Command's Barcode Scanner is still in the file named scjp.bap:

In Game References to the Scanner

A few of the in game voice overs and text related to them reference the scanner. These are not heard in Dinosaur Battles.

These unused enemy classes were found in the text string data of scjp_Loc.res. The "Test" class was obviously used for testing purposes.

These graphics are like nothing else in the game. What it was used for isn't fully known but it may have quite possibly been used for some Pteranodon related minigame. It is possible that the Pteranodon was originally supposed to be playable through a minigame or it was thought of after the Pteranodon was scrapped as playable in fights as a consolation. Whatever the case was, one thing is certain: It didn't get used.

Looks like the Battle pop up window that is seen when the player wins a fight, except almost as large as Dinosaur Battles' screen resolution. (which is hardcoded 640X480).

This menu image is really large. It is as big as Dinosaur Battles' screen resolution almost. What it was used for is unknown. However, it looks like a larger version of the windows that pop up when a dinosaur ambushes the player or a dino wins a battle. The difference is, this window is twice as large and has an X button instead of "click to continue" in the corner. On closer examination, it resembles the DinoVoc. This graphic is located directly after the Pteranodon one above, so it may be related to that somehow.

This quit button is nothing like the one in the final. Let alone the fact it looks like a player would access it from the overworld. It could have been used for the Lab at some point as well but might have been swapped out with the image of the tiny map.

These graphics are actually in six separate files but have been put together for the sake of preventing the article from being a bigger formatting mess than it already is. The objects seem a little simple but may be related to the Pteranodon "minigame" possibly since they are located in the scjp.res file after it. However, there is a graphic for the cursor used in Dinosaur Battles that separates these six images from the Pteranodon related image above.

There's actually quite a few voice overs that go unused. Many of them are actually used for scrapped conversations.

Apparently, the final battle was going to have either a bit more conversation or an entirely different one. Primo would tell the player to play "bull and kitty" to distract Dr. Corts' Spinosaurus while he/they entered the steel pyramid. In the final, they go in after you beat her Spinosaurus in the ending cutscene. There's a conversation Primo has with Kirby as well in this scrapped sequence.

Well, not surprising that the Primos don't know what a joke is considering they're cloned humans. Text data for this entire conversation also exists.

There are a TON of these. Some of them may be put into one file if necessary.

Was the DinoVoc's computer supposed to be more verbal than it is in the final?

Seems to be a very short unused conversation between Olivia and Aaron. Aaron is the know it all of the group, the "Brainy Smurf" if you will. So this conversation is rather interesting and a little funny to say the least. A shame it doesn't seem to be used... There's text data for this conversation as well.

Well at least Olivia cared enough to stop him from getting himself killed. A lot of these unused voiceovers seem to reveal a bit more activity between the Junior Explorers than the final shows.

Being the first Junior Explorer the player comes across, Gabe seems to have a lot of unused voice overs. Some may have been used in Scan Command but aren't used in Dinosaur Battles. There's a possibility a few are used for the overworld but not seen often because of the effort it takes to get them to appear.

The Steel Maze is the last area of the game. It has a lot of booby trapped fights. When you first enter it, one of the Primos will mention narrow passages as a booby trap. However, there don't seem to be any narrow passage related booby traps. However, the following comment indicates that they were planned at some point and it goes unused unlike the other comments relating to booby traps:

"Here's one of those narrow passages Primo told us about. Make sure you're using the right dinosaur."