It’s true to its name.

On unknown circumstances, the game can crash at the very end of a Challenge run's song, and the special rewards given to players will be instead replaced by default text, its title being "Ribbon's name" and the subtitle "ribbon description". 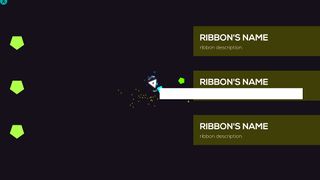 Seems like an unused challenge (How would playing Party Mode be a challenge?)

Some kind of error message.

You can't load an empty playlist, so these are unused.

Not sure what this would be for.

You can't join a lobby while inside one so this goes unused.

In with all the control texts. Could you at one point shoot fireworks?

Some early text for casual mode.

Credits text for Never Modern Talk. Even though none of their music is actually accessible in-game.

amiibo functionality did get added in the version 1.3 update to the game where scanning the Shovel Knight amiibo unlocks new levels. Additionally, the player can scan up to 5 amiibo daily for free beat points.

The song "Count Five and Die" by Never Modern Talk can be found in the files.
Unlike the other songs in the files, this is the full song instead of fading out after about a minute.

If the game detects that it is a pirated copy, programmer and game designer Lachhh will personally chew you out for stealing let you know he understands, ask you to support the game via word of mouth, and invite you to check out his stream.