The sequel to the most underrated RPG ever. Too bad it was only released in Japan.

Like the first game, there are unused moves. All of them are named ボツ ("botsu": Unused) and are unfinished.

Like the first game, unused hexadecimal tiles exist in the ROM, at 6A2774 in Power Version, and 6A244C in Speed Version, although these tiles are updated slightly, with shadows. These tiles were likely used for debugging.

By going to offset 1283D8 (in Power Version), or 1281D8 (in Speed Version), and modifying its value, the music of Takedama Village can be changed. If this value is changed to 10, an unused tune can be heard. It is very short, and it is unknown what this music was meant to be used for.

Telefang 2 has various ringtones in the game, but some are never used. These were intended to be downloadable off the Internet in the game. These ringtones, like various downloadable ringtones which are used, have names based on various Denjuu.

Interestingly enough, while ringtone 67 is used as the third regular (i.e. non-downloadable) ringtone for the red D-Shot, evidence suggests that it was initially meant to be downloadable, as hacking it in the 7th, 8th, or 9th slot reveals its ringtone name: Diablos.

There are graphics for three unique unused T-Fangers, as well as 13 placeholder copies of Midori's T-Fanger sprites. Kyou's front sprites could have potentially been used for the opposing player during link cable battles, but they aren't. Matsukiyo and Mossan never battle the player (or even leave the human world, for that matter) so their battle sprites are never seen either.

As in Telefang 1, you can use the D-Shot's Dial function to input the phone numbers of Secret Denjuu in order to recruit them. These numbers were originally shown on TV commercials, fliers in toy stores, etc. If you, however, input the phone number for Smilesoft's user support center as displayed in the game's manual - 0354650752 - and press the green OK button, you'll get a response from a woman at "Support Center". 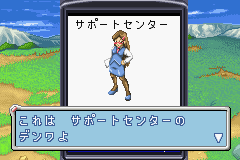