Kid A Mnesia: Exhibition is a digital exhibition of Radiohead music and artwork. You explore a giant bunker, enjoy the odd atmosphere and bumping tunes.

The game has a lot of unused stuff buried within its very unorganized files. There are some files that are marked as "DEPRECATED" or "UNUSED" but are actually in the game.

These gun models feel very out of place in a musical walking simulator. They also seem to be fully rigged to move the trigger, hammer, slide, magazine, etc. 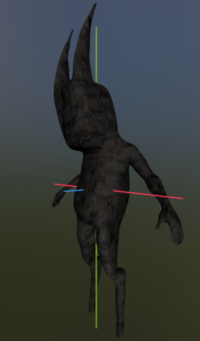 This model is in a folder named "Demo_Minotaur", which isn't in the main "Minotaurs" folder that contains all the other minotaur models in the game. The model looks similar to the Onyx Minotaur which is used, but that one has a toothy mouth and thin tail.

There are unused animations of the Onyx Minotaur, which is also the player character, holding and aiming with the M4A1 rifle.