Kid Icarus is the story of a winged angel named Pit (not "Kid Icarus") who is sent to protect Angel Land from an onslaught of beasts, most recognizably Eggplant Wizards. 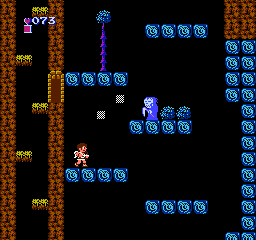 The Reaper enemies shoot out sprites which correspond to their sight hit detection. These use tile #$5F, which is normally blank; replacing the empty tile with any other graphic (e.g. a checkerboard in the above screenshot) will make them visible. Because sprites can't be used for collision detection on NES hardware, it's likely these sprites were assigned a visible graphic during development for debugging purposes.

These sprites are shot in an alternating high/low pattern, as seen in the screenshot. These sprites will disappear if they touch any non-empty background tile, at which point the Reaper immediately throws out another one.

Game Genie code ZEXEXVYS will modify the routine that writes tile #$5F to use tile #$0A (a placeholder square) instead, rendering the sprites visible.

The Japanese/Famicom Disk System version notably has more instruments than it's NES counterpart. Interestingly, this would become the variant which would also be referenced in Kid: Icarus Uprising.

Same applies as above.

The original Japanese title is 光神話 パルテナの鏡, Light Myth: Palutena's Mirror. Besides the title change, the English logo uses a heart piece and a pegasus wing for a stylized "i" and "r". In addition, the green decoration received darker shading, the clouds and copyright were repositioned, and the trademark symbol was redrawn.

The Japanese version features a File Select screen with three save slots, which displays your score and how many hearts you've collected. A top five high score list is also present. The NES version uses a tedious password system instead. 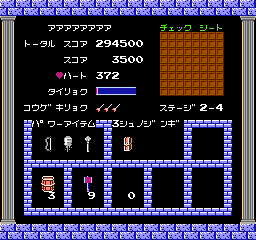 Additionally, the "Check Sheet" (MAP) text is green colored in the FDS version.

All five endings in the FDS version consists of a screen with Pit and Palutena against a black background. In the NES version, some nice graphics were added and the best ending and the other four endings background differed slightly from each other. In addition, the message was instead moved to a separate screen and a staff roll was added.