A Japanese game, based on the American film King Kong Lives, which was only released in Japan. Funny how these things work. 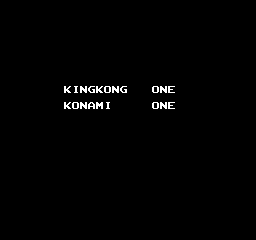 Similar tests appear in other Konami NES games such as Ganbare Goemon!, The Goonies II, and Gradius. 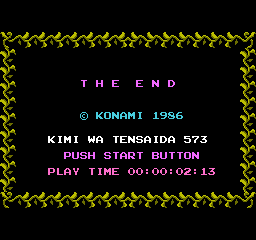 After beating the game, when THE "STAFF" roll is about to end, before the messages "PUSH START BUTTON" and "PLAY TIME" appear, press and hold A + B. Another message appears, depending on how many hours in total you've played. There are 24 messages in all. Most of the numbers at the ends of strings are goroawase, meaning they can be pronounced to approximate Japanese words that are either present in or refer to the accompanying message.

Press Right, Left, Right, Left, B, A, Up, Down, Up, Down at the title screen and then press any other button before pressing Start. During the game you can press the A button on the second controller to switch level or the B button to hold a game.

There is some unused text strings previously used for some menus or messages. First one is a missing STAFF person name, that doesn't appears in the final STAFF roll: "SHIMONETA KENJI".

Second ones, is a presumably strings from the old version of the title screen: "PLAY SELECT", "KONAMI 1986", "PUSH START BUTTAN".

And finally, at the beginning of the RESET routine, a version string placeholder appears: "RCxxx 1.0 .date.".