Kingsley's Adventure is a 3D platform game for the PlayStation that was developed by Psygnosis. Despite its cute, colorful cartoon look, the game is incredibly difficult, especially in the final castle.

The gamedata file for Kingsley's Adventure contains some unused dialogue, including some for a boss fight with a character named Waldo that does not exist.

This dialogue was undoubtedly intended for the prisoners at the end of Reggie's Castle Ruins, but there is no way to talk to them, as they are locked in jail cells that cannot be opened.

This all appears to be dialogue from before the fight with the excised Waldo boss.

The post-fight dialogue suggests that the spell on Waldo was broken. There is no character named Waldo in the game and it is unclear where this boss fight was intended to take place, though the dialogue suggests it would have come right before fighting Bad Custard, the final boss.

A folder on the game's disk contains all the boss themes and a few other songs in RAW format. Three of them are unused: "SVEN", "CRAB", and "SYLVESTA". There are no characters with these names anywhere in the game. It should be noted that the gamedata file lists the name "Sylvester" right along with "Waldo" and all the unused dialogue, as seen in the section above. This heavily suggests that Sylvester and Waldo were meant to be one and the same, considering that most of the game's bosses are an animal with one name that is transformed by Bad Custard's magic into an animal with another name. Example: William the Frog is transformed into Rex the Crocodile. Defeating him changes him back to normal.

In an interview with the Kingsley's Adventure developers, it was mentioned that there is a fridge in Reggie's Castle Ruins with a talking celery and carrot trapped inside. 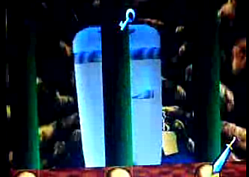 Indeed, there is a refrigerator in one of the jail cells at the end of Reggie's Castle, but there is no way to get to it and no way to unlock it. The only text that could have possibly been used for the supposed talking vegetables inside would have been the unused "Defeat Reggie and we will be free!" line, but that could have also applied to the generic villagers in the other jail cells. As such, there is no solid evidence that these characters were programmed into the final game, although a drawing of the celery character can be seen at Cheerful Madness, a website run by the game's character designer.