Kirby: Triple Deluxe is the first Kirby game on the Nintendo 3DS, and the spiritual sequel to Kirby's Return to Dream Land. One of the main gameplay features is hopping from the foreground to the background and vice versa, a feature seen in various other games. There's also an obscene collection of keychains.

Many enemies have test animations titled "TopL". Most of these animations are based on pre-existing animations, but they're noticeably broken.

The Invincible Candy has one short unused animation that consists of the little star on it tilting side to side. It's titled "TopL". Kirby's Return to Dream Land also has a similar unused animation, but it's slightly slower.

The Gyro Cannon has an unused test animation also called "TopL". It's esentially a slowed down version of the regular launching animation. You may have to click this one to animate it.

For some reason, various test room parts are found in RomFS/gfx/STD/Step/Decoration/Boss5/Parts.bch.cmp. "Boss5" is the folder corresponding to Pyribbit's stage, the boss that resides within Endless Explosions. No other Boss stage folder has these parts. 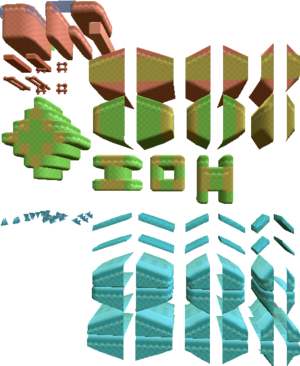 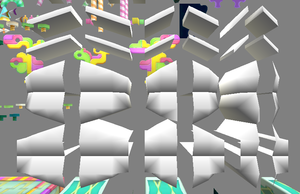 Inside RomFS/gfx/STD/Fight/Decoration/LastStage/Land.bch.cmp is the model for Another Dimension's foreground. Floating above what is normally seen in game are a pair of unused platforms. Only one is finished, as the one on the right doesn't have its surface modeled. This may suggest that the battle stage Another Dimension was planned to host platforms similarly to Flower Land. 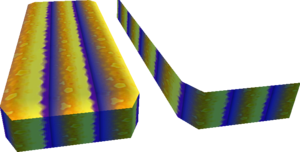 Found in RomFS/gfx/STD/Fight/Item/ItemBox.bch.cmp is an unused and earlier texture for the Blue Item Box that appears in Kirby Fighters. The main difference is that the final version uses a lighter shade of blue and adds a random dark pixel near the ending of the rising curve.

Queen Sectonia has two unused health bar names located in RomFS/msg/(language folder)/GameInfo.msbt. One is for her vines in the 3D Cannon segment in Eternal Dreamland, while the other is for her form while fused with the Dreamstalk. While "Sectonia Vine" can be seen in a pause menu header as "VS Sectonia Vine", this boss health bar name is not used in any capacity. These names are localized into all supported languages.

This game's sound archive is based, if not, directly lifted from Kirby's Return to Dream Land, meaning that the unused sound effects inside that game's Wave Archives are still here, including the leftover sounds from the cancelled Kirby for Nintendo Gamecube. This is the case for most future Kirby games. As such, only new unused sound effects will be shown below.

Many Copy Abilities that appeared in Kirby's Return to Dream Land have been nerfed in Kirby: Triple Deluxe via the removal of some of their moves. A lot of these moves, however, have all of their Mint coding still present in their archive, located in RomFS/mint/Step.bin.cmp under Scn.Step.Hero.

Please note that due to visibility problems with Kirby's model, our good friend Waddle Dee from Kirby Battle Royale will be used to display the animations instead, as they share a similar body shape and bones. No further editing was done.

While Archer is an ability original to this game, it does have one unused move. The only state it has is called "StateDebugSquatWait", but it appears to be empty. Kirby Fighters 2 brings back this script with actual functionality: When using the "Camouflage" technique and pressing the B Button, Kirby won't attack and instead will cycle through all of the cardboard desings that the Camouflage can spawn.

The attack "Revolution Beam" from Kirby's Return to Dream Land, activated by repeatedly pressing 1/B in mid-air, has fully coded Mint animation scripts, states, and even all of its animations Kirby's Return to Dream Land are back. While it has everything in needs to work, it can't actually be used in-game, and only the regular Beam Whip will be activated. It has two animations scripts called "AnimScriptRevolution" and "AnimScriptRevolutionEnd", and one state called "StateRevolution".

Circus is another ability original to this game that has an unused move. It has an animation script called "AnimScriptDebugBalloon" and a state titled "StateDebugBalloon". While it is currently unknown what it does, one can assume that it involves the attack "Balloon Pop Art" in a way similar to Archer's DebugSquat, with the Balloons cycling through their mutiple forms when pressing with B.

Similarly, Hammer's "Triple Hammer" attack from Kirby's Return to Dream Land activated by holding 1/B and then releasing it has animations, an animation script called "AnimScriptTripleHammer" and a state called "StateTripleHammer". Kirby will never begin charging his hammer, and will only do a regular Hammer Attack. This didn't stop Hammer from being the best ability in the game, though. The Triple Hammer lacks any of its particle effects.

Ice's "Ice Ball", performed by pressing down + 1/B while running in Kirby's Return to Dream Land is still here. It has every animation required for it, as well as two animation scripts called "AnimScriptTackle" and "AnimScriptTackleEnd" and two states called "StateTackle" and "StateTackleEnd". It even has the model for the ball of ice Kirby is encased in while doing the attack, complete with an animation. This move would later see the light of day once more in Kirby: Planet Robobot and Kirby Star Allies, with the former directly reusing the unused assets.

The attacks "Thunderbolt" and "Lightning Strike" from Kirby's Return to Dream Land that were activated by pushing up + 1/B and down + 1/B in the air respectively have a lot of animation and state scripts, as well as the animations from the previous game. Thunderbolt has the animation script "AnimScriptOver" and the state "StateOver", while Lightning Strike has the animation script "AnimScriptUnder" and state "StateUnder". Like with Ice, both attacks returned in Kirby: Planet Robobot, but their range was drastically nerfed. Bummer. A move of similar usage to Light-Speed Dash appears here, a move never added until Kirby Star Allies. Despite not requiring an electric charge, this dash move consumes it all.

The "Triple Throw" attack from Kirby's Return to Dream Land has the animation script "AnimScriptTripleThrow" and the state "StateTripleThrow" and three unused animations. However, in this case, the charging and walking animations for Triple Throw are actually used, as the player can hold their regular Spear Throw and walk while holding it. Their effects and sound effects are missing in its remnants, though. This attack technically makes an appearance in Kirby Star Allies, but is instead used by Bandana Waddle Dee, as the Spear ability was cut.

Inside the "Etc.bin.cmp" Mint archive, located in RomFS/mint, there's some sample code under Scn.Nakano.Sample.IntValue(), which was presumably put into the game by Hiroaki Nakano, the main programmer. This is most likely a leftover from the development of Triple Deluxe's version of Mint.

Inside RomFS/mint/Step.bin.cmp under Scn.Step.Debug, there lie three Debug debug scripts that appear to be empty. They're called "CameraFilterMaxSizeCamera", "DamageMonitor" and "GeneralDrawer". The first one returns in Kirby Star Allies, albeit still empty, while the last two also appear to be in Kirby Fighters Deluxe, while still being very empty. One more script is mentioned in Scn.Step, called "DebugStepSettingProxy", but it's... you guessed it, empty.

The fdg archive, located in RomFS/fdg/Archive.dat, has unused scene data for non-existent Dedede's Drum Dash test maps. All of them contain the path "gfx/STD/Den/Decoration/Lv1/BG.bch.cmp" in Asset Group 2.

In the Japanese version of the game, during the tutorial, a red circle will appear whenever an action is properly completed. In the international versions, a green checkmark will appear instead. This is likely because tests in Japanese schools have circles represent correct answers while check marks represent wrong answers, whereas it is the opposite in international schools.

All the level names were changed for the other language versions.

The stages for Kirby Fighters also had their names changed for the different languages.

Likewise, the names of the musical themes for the Dedede's Drum Dash levels were changed.

Some of the Copy Abilities had their names changed for the other language versions.

All the bosses also had their names changed for the other language versions.

While a more in-depth translation is beyond the scope of this article, some descriptions are very different between languages. The most notable is that of Soul of Sectonia's second phase, as the Japanese text is written from Sectonia's point-of-view as she acknowledges and accepts her death, whereas the English text is written in third-person and removes any suicidal implications.

The 1UP models for Kirby and Dedede change depending on what language the player set the 3DS to. Dedede's French 1UPS differ slightly thanks to a shading quirk in the "V".

Once again, the Sweet Potato in the Japanese version is changed to a Mint Leaf in the international versions. Although in Kirby's Dream Land the graphics remained the same between regional versions and only the name was changed, Kirby: Triple Deluxe uses different models for different releases, with the Japanese language version clearly using a sweet potato and the international versions clearly using a leaf. This change carries over to Kirby Fighters Deluxe and Kirby Fighters 2 as well.

In addition to other name changes between languages, the Sweet Potato keychain in Japanese is likewise renamed to a Mint Leaf keychain in English.

The project's internal name is "Parufe", according to the game's sound archive. Parufe (parfait) is a type of dessert. Aditionally, the game sports a second name, that being "Kirby3DS", found in ExHeader.bin.