There are at least four unused rooms in this game.

This "room" consists of nothing but some garbage data... and water. It has no background, and the music that plays is a track used in "Gourmet Race" Stage 1. The room's ID is between Trial Room #2 of "Dyna Blade" and the first level of "Gourmet Race".

A leftover from Kirby Super Star. Decorations got changed, but the general layout is mostly the same as before. It was supposed to act as an ending sequence to The Great Cave Offensive, just like it does in the original game, but Ultra uses a cutscene to accomplish this. This room has no background, unlike the original game, but the music that plays there didn't get changed. Judging by the room's ID, it's placed right before the intro room in The Great Cave Offensive.

This room, just like the previous one, is a leftover from the original game. It actually has a background this time!... but not music. In the original game, this room acts as a cutscene in "Revenge of Meta Knight" when Kirby becomes a Wheelie Rider, but this game uses a cutscene to accomplish this. Judging by the room's ID, it's placed right after the Meta Knight battle and before the Halberd escape sequence.

These two rooms might have been used before the cutscenes were made.

This room was created most likely to test various terrains Kirby can encounter within the game, including sloped tiles, switch platforms, a cannon, bomb blocks, and water currents. And, you probably guessed it, this room has no background, and the music that plays here is a track used in "Spring Breeze" Stage 1! It's also worth noting that this room is the last room in the game, judging by its ID, and for some reason all 3 tutorial rooms are placed right before it, with the IDs of 544, 545, and 546 respectively.

The cannon is actually fake - it doesn't take you anywhere! Instead it just self-destructs. These types of cannons are seen in some areas in the retail game. 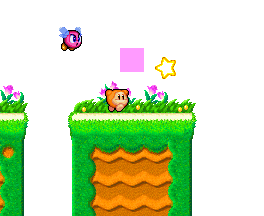 In the first stage of Spring Breeze, Green Greens, there's an entrance coded (marked pink in the screenshot) nearby a Warp Star that can't be entered in normal play. Through hacking you can enter it. 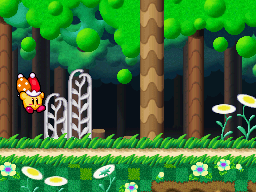 The entrance leads to the room that you'd normally get to by riding on said Warp Star. The developers most likely put it there for testing purposes before the Warp Star sprite was finished - even judging by the room's ID (1), it's safe to say this is the first level made for the game!

This entrance is also present in the Metaknightmare Ultra version, which serves the exact same purpose.

After Kirby destroys the Halberd's left wing and flies back to the ship, he lands in a room where he has to enter a giant hole in the wall behind to progress. 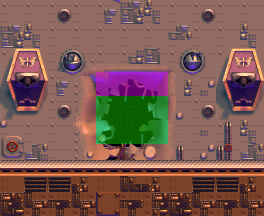 There are 9 entrances, but only the first two rows from below can be entered (marked green). The highest row is intentionally set to not be enterable (marked pink), as it probably would be weird seeing Kirby enter a wall. Entrances marked pink warp Kirby to the exact same location as the enterable ones, if entered.

Said entrances are also present in the Metaknightmare Ultra version, which serve the exact same purpose.

Each tutorial room (except for one in The Great Cave Offensive, the tutorial there takes place in a cave) have a trigger (marked pink in the screenshot) that change the tile it's on to one of the unseen ceiling tiles mentioned in the section below... for some odd reason. 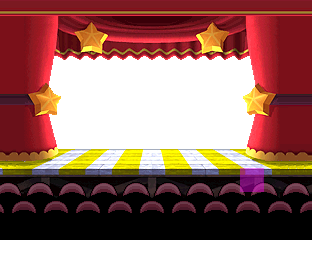 Because the trigger never actually triggers, you can't see both the trigger and an unseen tile in action. The tutorial rooms are located in The True Arena.

Every single tileset in the game has at least one dummy tile, which almost always acts randomly. One time it can spawn wind effect, other times it can act as another tile, or just be a decoration. It doesn't have a specific graphic, either - it grabs random pieces from the tileset's tiles and puts them together. 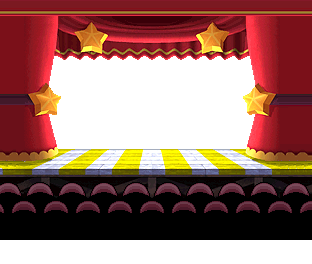 All tutorial rooms (except for one in The Great Cave Offensive, again) have unseen ceiling tiles at the top. Because the camera is locked in place, it's impossible to see them normally. There are a whole 12 tiles that go unseen because of this.

For some reason, most if not all tilesets used for the Halberd, including the version in Milky Way Wishes, have weird unused tiles. Not only do they look weird, they have many, many duplicates of each other spread all over the tilesets!

Same thing here: almost every battle against Twin Woods uses tilesets that have many duplicates of this one tile, which consists of just 9 small white crosses. (Black background added for visibility, actual tile background color is transparent.)

And here. There's an unused weird yellow tile in the tileset that has many duplicates of itself.

...and here. There's an unused tile that only exists in Metaknightmare Ultra's version of the Fatty Whale boss room in The Great Cave Offensive.

The tileset used in the secret final boss arena has some unfitting tiles, including wind tiles and a water tile. This time the developers didn't make graphics for them.

There are many tiles like this in other tilesets. 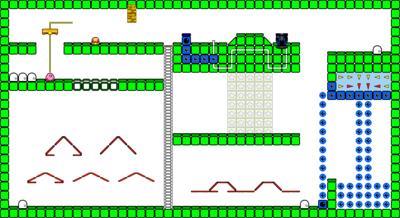 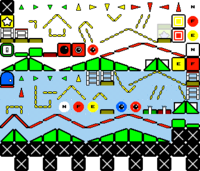 The Press Start text has a translation into katakana above it that was removed outside of Japan. The European version (curiously not retitled "Kirby's Fun Pak Ultra") changes the copyright date from 1996-2008 to 1996-2009, which also applies to the subgames.

Like Kirby Super Star, the differences in the food items between the Japanese and international versions are retained in this game.

In the Japanese version it is possible to perform a glitch that lets you fly upwards or downwards at tremendous speed, after doing a Dive Bomb and canceling when near an object that puts you in a large amount of hitstun. This glitch does not work on the international versions.

More info on this glitch can be found here.

The international versions add a Sir Kibble to the room where you can find the Bandana and Seasons Heart treasures.

Revenge of the King

In the Japanese version, the last two stages have altered names.

According to the game's sound archive, the project's internal name is "sdx plus". "SDX" stands for "Super Deluxe", the second half of Kirby Super Star's Japanese name.