Put the following code in kram.xml or kram2.xml to add a developer credit to the game's attract mode: 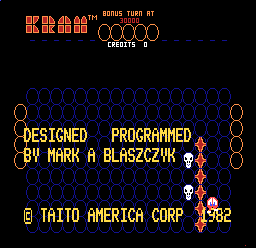 This screen will come up after the "'WALL' STOPS ENEMIES" text. The first line is supposed to say "DESIGNED + PROGRAMMED" but there's no "+" character in the game's large font. 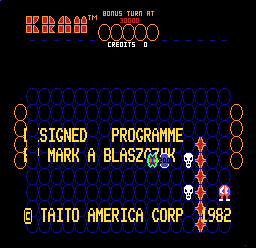 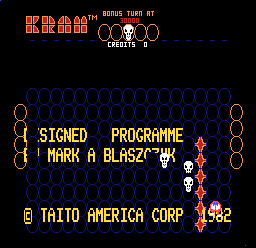 The subroutine that displays this text is part of an unused tutorial bit with an equally unused hazard: A green and blue orb

that can transform Kram targets into Skulls. Since the text is printed on the center of the screen instead of near the top, it will get partially overwritten by enemy graphics. 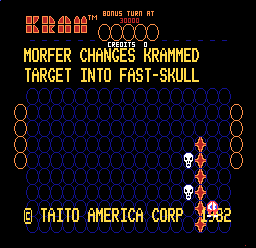 The encrypted version of the game (kram3 in MAME) includes alternate text which reveals that this enemy is named Morfer. Unfortunately, the actual demo portion for this bit seems to be broken in this revision and the game will lock up after displaying the text. Put this code in kram3.xml to see this text: