LEGO Racers is a LEGO-themed kart racer, with the main plot focusing on beating Rocket Racer, supposedly the greatest racer ever.

Oh yes, the infamous Knightmare-Athon shortcut. This was rumored, questioned, and forever asked about throughout the whole community. Knightmare-Athon became the only track in the game that went without a shortcut, and it was searched on for years. Thanks to modding and uncoverings by the developers, the secrets behind the shortcut were finally revealed. Firstly, as it turns out there are remnants of not one, but two shortcuts planned. 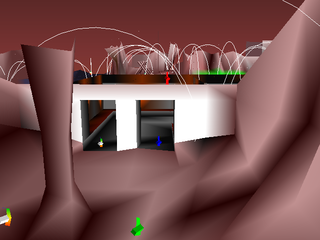 Here is the first shortcut. Notice how there is a red brick above the right doorway. This brick is completely inaccessible in the normal game. From what can be inferred, you were originally to knock down the pillar in front of the castle to form a ramp and get up there, and the shortcut would have skipped over the quick tour through the castle and taken you out before that hair-pin turn, judging by a badly patched wall. This one was totally scrapped from the final game. 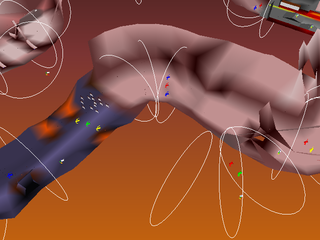 This is the gist of the other shortcut. The white rings here are invisible through normal gameplay -- they are checkpoints, and are used to determine how you complete a full lap. Notice several going out of the boundary. This outlines where the shortcut was going to take place initially. You would shoot a boulder, and it would roll out of the way for the shortcut to open. You would drive over the tunnel, and come out at the part of the track with the ship shooting the cannonballs. This one seems to have been removed very far into development, because more remnants of this short-cut exist than any other. 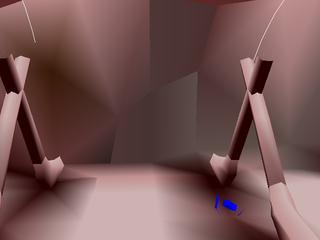 This is the wall where the boulder was supposed to be. It's not patched very well and looks blocky compared to the rest. 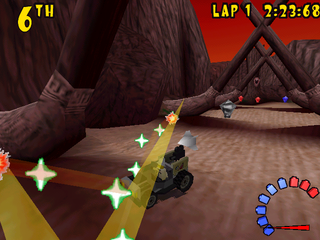 This prototype screenshot shows the boulder while it was still in place.

Pirate Skull Pass also has remnants of a scrapped shortcut. Granted, it does have a shortcut, but it's not really much of one, more like an alternate pathway not worth taking. 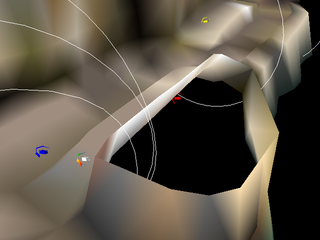 Here is the first power-up which is completely inaccessible. It's under a hill and impossible to reach. 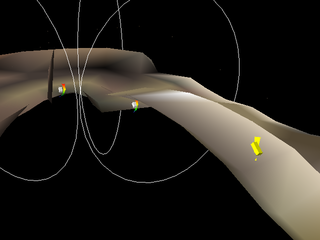 This is the other inaccessible power-up, in the center of the photo. 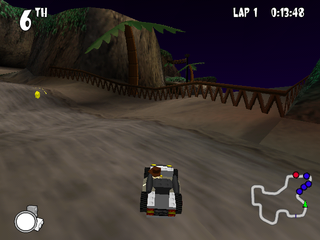 The place where the shortcut was going to start was barricaded with a fence. Early prototype screenshots show that the fence was completely absent at first, so it would only make sense. You would have first gone through the wall on the left of the shot (given a blocky texture), traversed under the track some, and come out under one of the hills, as said hill shows to be a glitchy corner.

Desert Adventure Dragway also has a scrapped shortcut. There is a green brick under the sphinx's shortcut and it's unreachable. 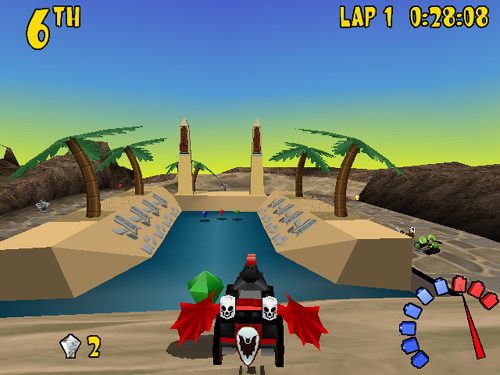 An early screenshot shows the sphinx's shortcut with two roads. The one on the right was cut in the development, the other on the left is still there. In the middle of the screenshot there is water or something like that. The sphinx is totally absent, in its place there are two obelisks. It's interesting to note that there are crystals (now bricks) one red, blue and green on the blue thing and one green near the car (among other similar to the car of Basil the Bat). There is a white crystal on the road to the left.

This unused sound is found in Knightmare-Athon's race folder. It's very likely it was going to be used for when you hit the boulder to open the scrapped shortcut, supported by the pun in its filename.

Also found in Knightmare-Athon's race folder is this generic witch cackle. It was probably an early version of the cackle the witch makes near the end of the course.

There are two prints of the 1999 version, and a re-release in 2001 that had a few minor tweaks made to it. Firstly, the copy protection differs between the three versions. The later 1999 print had SafeDisc V1 copy protection (though some of the earliest prints lacked it for some reason), and you had to have the disc in the drive to run it. The 2001 version removed this, allowing the player to install the game and play it without the CD.

Secondly, the 1999 version had development code in it that allowed it to run with the uncompressed JAM archive (the game's resource file is called LEGO.JAM). The 2001 version removed this code, though why it didn't remove the shortcut remnants is beyond us.

Much like other early-2000s LEGO game revisions, the printed manual was excluded in favor of a PDF manual.

The 1999 version awards the player a trophy on their character's license for every boss beaten. These go unused in the 2001 version, for reasons unknown. 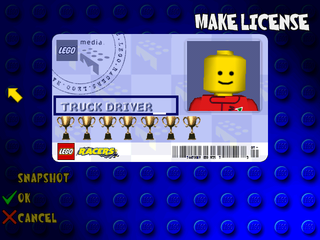 These are the loading screens for each version, which were an element changed twice. The very early prints of the 1999 version had the map extended to fill the entire screen. The copy-protected 1999 prints changed this to only be a select few. The 2001 version shrank all of them into a small box in the middle, with the same blue-studded background as the other menus.

The 2001 version also significantly altered the game's physics, in the process removing a central feature of the game. The manual states that the placement and amount of bricks on a car will affect the car's balance. While this is fully functional in the 1999 release, the 2001 release completely disables it. This change in physics also results in the side-effect of being able to go up the back of the shortcut in Imperial Grand Prix, despite the track data being identical between releases. It is also of note that neither the N64 nor the PS1 version feature this mechanic.