LEGO Star Wars II: The Original Trilogy, but it's on the Game Boy Advance, and doesn't play as well as the console versions, or even its previous game LEGO Star Wars: The Video Game on GBA! 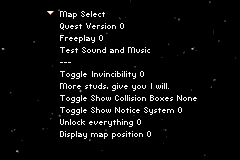 Enable CodeBreaker code 74000130 00FF 33004E80 0002 then press L+R at any time to open an elaborate debug menu granting the ability to warp to any area in the game, toggle invincibility and access a sound test. 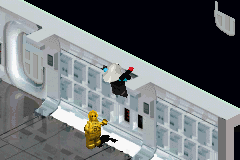 In the stage Blockade Runner, once you've opened the door to Leia with C-3P0 with an activation panel, you can perform a glitch to walk around her and not activate the arrow appearing to proceed with the stage. Performing this glitch by walking on the edge of the hall in a certain way, you can walk past Leia and go past where that arrow would be. The room doesn't have any of its objects spawned, and the part of the stage after the door isn't there at all. At the right corner of the room is a random door sprite on the upper right corner of the screen. When in this section normally, this isn't seen.