The original La-Mulana! Now you can have this exploration adventure MSX-style, by Nigoro under GR3Project.

mapg03.bmp, the file with the Temple of the Sun's tileset sprites, has a chunk of tiles not seen anywhere in the game. It depicts the field's guardian Ellmac and two wolves besides it.

There are four unused stone tablet images left in the game files. The first three can be found in eveg00.bmp and eveg22.bmp, files with the Surface's object sprites.

Image #1 seems to depict angels, which are actually mentioned in the remake.

What this was supposed to represent is unknown.

This crude drawing of the Endless Corridor (area eight) indicates the presence of a fairy in the first part, likely scrapped for being too obvious since that field can be accessed rather early in the game.

The last one is in the file with the Chamber of Extinction's object sprites, eveg06.bmp, depicting a mural and the Pochette Key. Probably meant for a tablet that does mention said item, but the same tablet just uses the previous image in the file, rendering this one unused.

There is one piece of stone tablet text in script.dat hinting at how to defeat a certain sub-boss. It was strangely not used, so players had to find out the way by brute force. 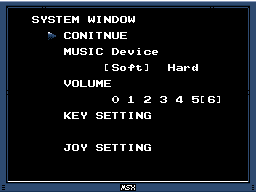 Pressing a number key from 0 to 6 on the Options screen (toggled by pressing F6) sets the sound effects' volume to a specific number going down every 5 digits, from 100 to 60. It's not documented in the manual, but it is explained by this image used there.
Since the screen does not look like that in the final game, this is likely a screenshot of an older version, notably with the absence of a second music option; whether the first one has always only modified the sound volume or which keys did it use back then however is unknown.
Other differences here are the distinction between keyboard and joypad (game controller) settings, MUSIC MODE and its choices SSCC and SC88 labeled MUSIC Device, Soft and Hard instead, and CONTINUE being misspelled CONITNUE.

The manual also uses screenshots with a japanese font different from the one used in the final version, in a more rough style similar to Castlevania's Japanese logo. All images are located in manual/manual/img2/.