La-Mulana is an indie "Metroidvania" game starring an Indiana Jones lookalike who ventures into ruins filled with traps and complex puzzles. It was initially released as WiiWare in 2009 with some chunks cut as DLC as a workaround for the 40MB size limit, which caused the English WiiWare version to be significally delayed and without the additional content.

Eventually, though, the complete version was ported to PC with unpacked resource files to boot. 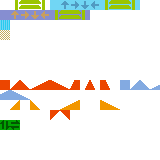 hit_parts.png shows a small set of colorful tiles not used in the game. The file name suggests that these were used during development to show collision for maps.

eveg17.png contains enemy graphics from the original La-Mulana that are used in the Gate of Time bonus area. The original surface birds are included in this file, but aren't used.

Perhaps as a more stylistic approach, the Life Jewel (生命の宝珠) item is translated as "Sacred Orb" in the English version, even though nothing about the original name suggests sacred. It's also only an orb in shape and specific meaning.