Lara Croft Tomb Raider: The Angel of Darkness is the sixth and last game in Core Design's original line of Tomb Raider games. As it turns out, Lara didn't get buried alive at the end of the fourth game. She arrives in Paris to find a close friend murdered...and she finds herself caught up in the criminal underworlds of both Paris and Prague in order to solve this mystery.

Deadlines absolutely mauled the developers' original vision, and as is par course for rushed releases, about half of the planned game was cut out—and not very carefully. It's the Sonic '06 of the Tomb Raider franchise. 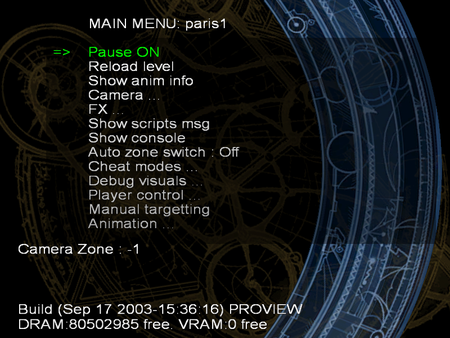 Extensive debug options can be enabled using the SCU or by entering the command line argument -debugkeys in the Windows version. Pressing Escape-Tab adds two items to the Pause menu: Debug options and Skip level. Debug options opens up several sub-menus, while Skip Level is self-explanatory.

Additionally, while playing, pressing B on the keyboard will turn off collision, refill Lara's health and air meters, and allow her to swim freely through the level. Event triggers are not affected. Pressing the action button will return her to normal.

These areas can be accessed using the TRAOD SCU and enabling the swimming debug function (press B on the keyboard). 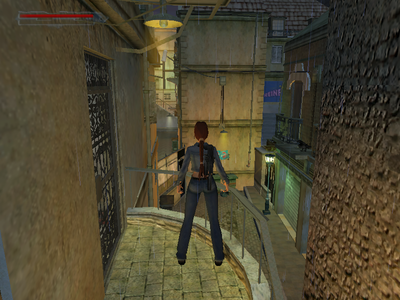 Beyond the first hallway door, there is an entirely unused ground-based route through the level, complete with exclusive voice clips and items. It is unfinished; several ledges are invisible and one large medipack may not show up properly. Part of the area can be glimpsed from the rooftops near the end of the level, and if Lara looks over the railing during the Stealth tutorial, she can glimpse the blinking light that indicates an item in the inaccessible section.

This section doesn't like to load properly; Lara must use the Courtyard Key to open the first door, or the next section of the level will be missing most of its textures. Using the Courtyard Key will reload the area before letting Lara continue. 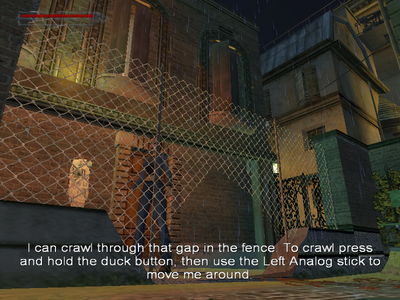 Lara's dialogue throughout this area refers to PS2 controls (like the analog stick), even on the PC version. In the unused tutorial, Lara teaches the player to crawl/commando crawl through tight openings; she doesn't do this in the final. The alternate route ends with Lara entering the gate into the front yard of the Derelict Apartment Block (this garden and gate are seen in the end of the regular level and in the next cutscene, but Lara dies instantly if she enters the zone during gameplay).

This level contains a strange oversight: after completing the Serpent Rouge, Lara exits at a high balcony. If the player takes one step back, then crawls forward and to the left, the game will fade out and re-load the Parisian Backstreets. The level can be completed normally but at the end, the cutscene that loads the next level will not trigger, nor will the death zone in the courtyard. This allows Lara to explore the alternate route through the level described above.

Lara can manually open the door leading to the Derelict Apartment Block; however, once inside, there is no collision. 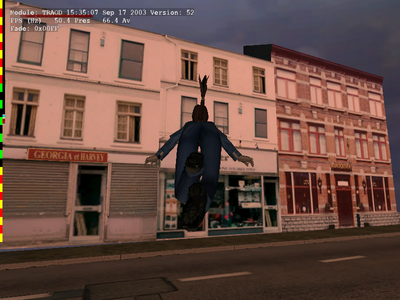 To the left of Janice, there is a low set of road barriers that prevent Lara from going further. The streets continue past the roadblocks, even using unique textures. 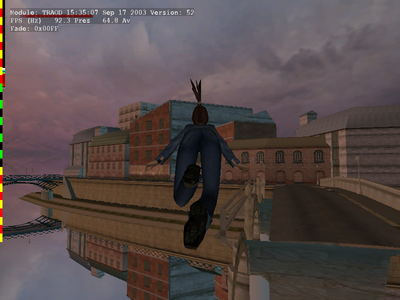 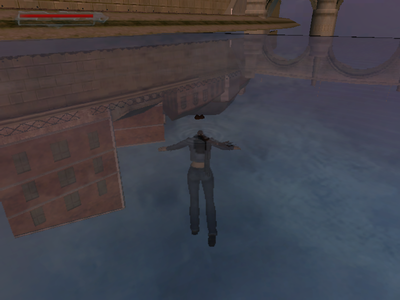 But the left is more interesting; there are two bridges over a river, with buildings in the distance- this geometry is never seen at all except during a brief cutscene. These buildings also have "reflected" versions built in- indicating that water was to be implemented. A large square of swimmable water is present. The conclusion is that Lara would have been able to access and swim in this river.

The area is most fleshed-out when accessed from the end of the Rennes' Pawnshop level. To do so, the player must use the debug mode to swim outside the pipe in order to avoid triggering the end cutscene, tap left to re-orient Lara, and then hold forward. Eventually Lara will appear out of the pipe, overlooking the river, which now implements the water texture throughout the entire left side and most of the right. Like before, Lara can swim in this water. But the most interesting part of the setup is the boat in the river; its interiors are fully textured, indicating a larger role at one point.

Louvre Galleries: Above the Ceiling 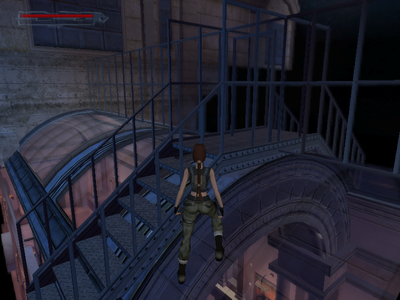 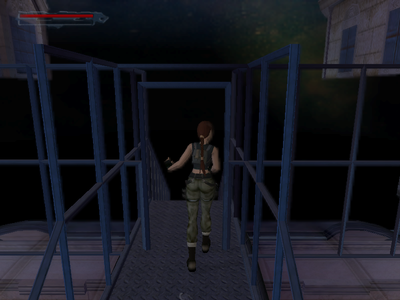 Above the first laser tripwire room, two sets of stairs and an iron doorframe are present. Although this area does appear normally during gameplay (it is the section of the level that takes place above the rooftops), none of it is loaded here except for the invisible door. 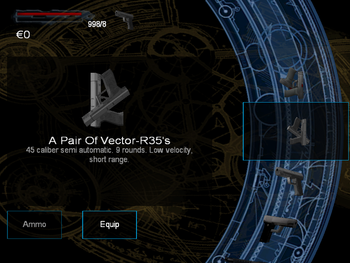 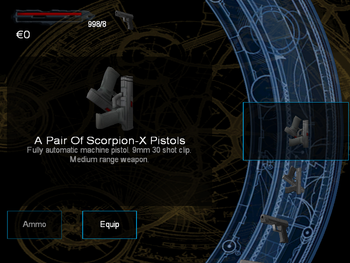 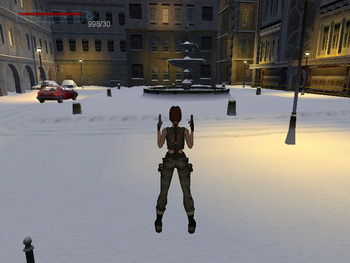 Angel of Darkness is infamous for being the only Tomb Raider game not to allow Lara to use two weapons at once. With the all-weapon cheat, two sets of dual weapons can be used during gameplay. Interestingly, if Lara selects the Boran X pistol (normally only available to Kurtis), she will dual-wield them. 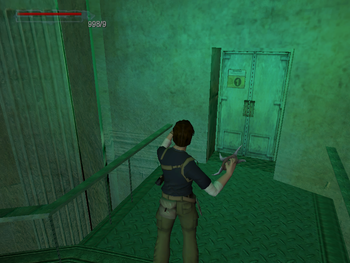 During cutscenes, Kurtis wields a bladed, circular weapon called the Chirugai (this name is only referenced in unused text) that he can control the path of using telekinesis. There is also a "Blade" item, which may or may not be the same thing as the Chirugai. Kurtis would have thrown the blade like a boomerang, locking onto multiple targets at once. With the all-weapons cheat on, this is Kurtis' "default weapon" and a rudimentary throwing animation can be seen, but the weapon itself doesn't work.

A strange ability called "Energy Drain". This doesn't seem to have a cutscene equivalent. 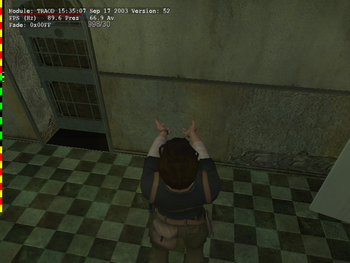 In the Sanitarium, Kurtis uses his Farsee ability to see through some barred doors and reveal a passcode on a remote table. In gameplay, it would have acted similarly to a free camera, but was not implemented in the final game. The animation of Kurtis raising his arms to summon the ability is seen when holding the action button with the first set of dual pistols equipped.

Kurtis was to perform a double-jump to increase his distance.

The game contains extensive unused dialogue for most of the main characters, often referencing cut items and abilities mentioned above, as well as many objects from previous Tomb Raider games. In-game dialogue as spoken by characters sometimes differs from the subtitles. Most of it was even recorded and left as audio files. There is a vast amount of it, so only the prominent characters' dialogue is included here. 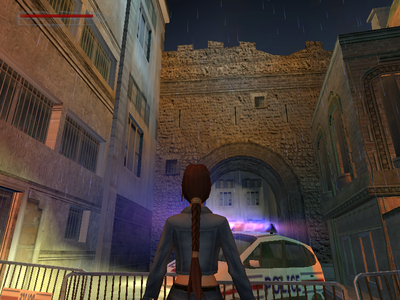 In the Parisian Backstreets, a strange wall that's textured like a castle sits right in between two buildings. It doesn't fit in the surroundings at all, and wasn't present in early screenshots. It's not even possible to approach this wall during regular gameplay- it exists in the unused alternate route through the level. There is speculation that this wall belonged to a scrapped level, possibly the scrapped Eckhardt's Castle levels from Germany.

Unless the door to the garden is opened first, this area looks slightly different. The police car and the fences will be missing, and the castle wall will be a solid wall, instead of an archway.

For some reason, these levels link back to Parisian Backstreets, but only through the use of glitches. Additionally, this turns off the "death zone" at the end of the level, allowing Lara to access the alternate route (see above). 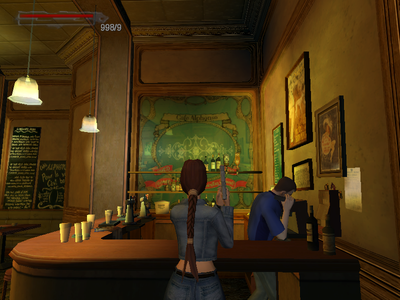 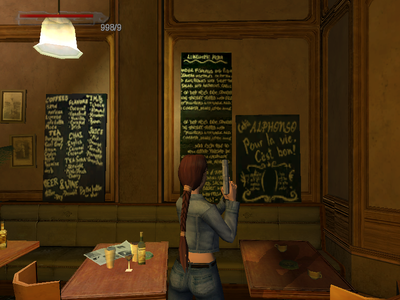 The cafe in the Parisian Ghetto has a different name once you're inside: "Cafe Alphonso".

Extra Respirator in Galleries Under Siege 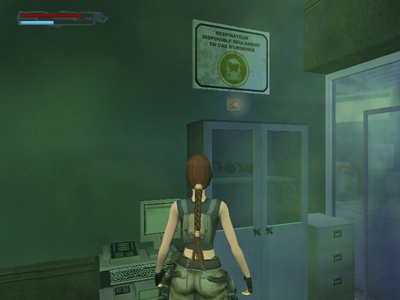 In the cabinet where Lara finds the respirator, there are actually 2 of them, and both of them flash like collectable items. She will only take one of them.

Unobtainable Chocolate in the Sanitarium 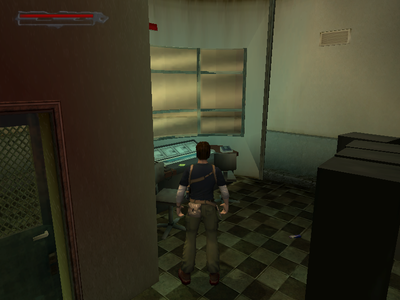 Kurtis uses his farsee ability to telepathically enter a room with the passcode written on the table. The room itself is locked at all times and cannot be entered physically. However, a chocolate bar can be seen on the ground inside; the only way to obtain it is with glitches.

Missing Textures in the Sanitarium 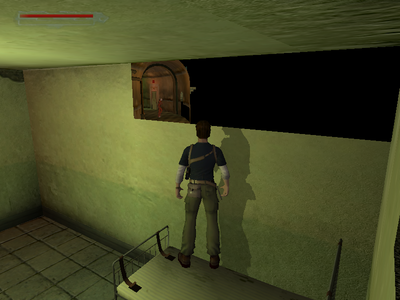 Several areas in the level, like the insides of several prison cells, are missing textures even under normal circumstances.