A charming little game released by Bandai as part of the now-defunct Legendz franchise of toys, games and anime. Unlike most games released outside of Japan, this game was bundled with a specially-designed adapter that's hard to track down these days and is actually required to play past the game's introduction.

Want an actual description of the gameplay? Well, you better hope you own a certain "Souldoll" toy first, or else there won't BE any gameplay.

This JPEG-format image is present inside the game, but not used anywhere. It is currently unknown whether there is a code that will cause the game to display this image, as it may have simply been used for padding.

Graphics such as these are used to display the names of terrains during battle. The shop interface never loads the graphic that says "Shop" and the "Den of Goblin" is a rougher name for the Goblin's Den that appears as part of a short quest.

What's interesting is that these unused graphics are compressed, while the used ones that display terrains aren't.

A small graphic that says "Money". It's only loaded into VRAM upon entering the shop interface, so it was probably meant to appear where your money is displayed.

Unused "afraid" portraits for the two player characters. Despite there being a number of frightful events in the game's story, the game always uses the "angry" portrait for such events.

The menu brought up after pausing has five selectable options. Each option is numbered internally from 0 to 4 and, as with any main menu, the number scrolls back to 0 after passing 4. However, it is possible to access menu options beyond 4 by forcing the game to highlight an invisible 5th option. From there, you can keep scrolling further down a huge list of hexadecimal digits to access hundreds of inaccessible menu options.

Most of these menu options are blank and crash the game upon selecting them, but options 10 through 16 have programmed behaviors that may hint at some kind of removed menu.

Entering these generic cheat codes will allow access to the menu by forcing the cursor to highlight option 10 upon pressing either up or down. Turn it off to keep scrolling down:

Below is a table of what each menu option does: 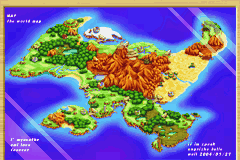 In-game, the top and bottom of this screen-sized world map are normally obscured by two black bars. Viewing the graphic in a map viewer reveals extremely blurry filler text that's hard to read due to the image compression. The only legible part that's visible just under the black bars is "the world map" and the rest is hidden so quickly that it can't be read.

While one of the bottom text blocks appears to be some kind of lorem ipsum text, the other interestingly contains a near-illegible date for the year of 2004.

This roughly translates to "Reborn Dialogue Test Message". Every Legendz has It's own unique dialogue for being summoned, so this string was probably used to test that feature.

These strings, found near the Legendz info, say "Unused" and "Unused Doll".

Enemy portraits 60-63 belong to an enemy known internally as "ダミー" (DUMMY), which uses sprites belonging to the "Vampire" enemy.

Uncompressed ASCII text describing various tests begins at offset 0x44D04C. Many of these appear to deal with the game's unique ability to write data back to a compatible "Soul Doll" toy.

The title screens are different between the only two released versions of the game. Besides the changed logo graphic, the Korean release of this game replaced the GBA rendition of the anime's opening song with another song that's used elsewhere in the Japanese release.

A chiptune-like "battle" theme which sounds nothing like any other song in the game. Interestingly, you can hear small bits of some of the other battle themes in this song.