It's not Touhou! Or maybe it kinda is. Maybe.

Most of the data from the game's sequel, Earthen Miraculous Sword, is present in the game files, including character art and sprites, as well as the graphics for their titles. Sound effects for the flash bomb are also present, as well as sound effects used in Sukune Katano's spell cards.

One possible reason for Evanescent Existence and Earthen Miraculous Sword sharing data is that they were developed and released simultaneously.

A yellow circle with an "S" in the center, also present in Earthen Miraculous Sword. This would later be used in Reactivate majestical imperial as a full powerup item.

A black T-shaped enemy with a green eye in its center. A similar enemy appears in stage 2, right before the midboss, but is circular. 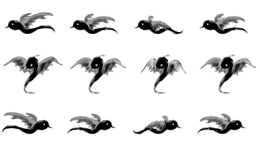 A grey-and-black enemy that resembles a snake with wings.

In an interview, JynX, the game's developer, stated that both of these enemies were intended to be shikigami of the Extra stage boss Tsurubami Senri, but were cut from the game due to this not being obvious. Both sprite sheets are also present in Earthen Miraculous Sword, as a result of the two games sharing data. 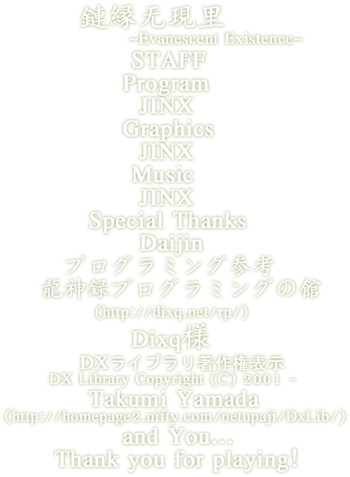 staff_roll_moji.png is what appears to be an earlier version of the staff roll. It is possible that a more standard scrolling credits sequence was intended, as opposed to the final version's more animated Touhou-esque sequence.

"JynX", the pseudonym of the game's developer, is erroneously spelled here as "JINX".