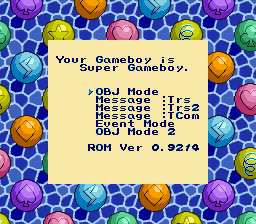 Game Genie code 001-E6F-F76 will start the game in a debug menu listing the version number of the game as well as the console the game is being played on.

Displays all basic messages in the game. There are development and test messages.

Displays all dialogue messages in the game.

Displays all item messages in the game.

Tests all game events. Most are broken and some will glitch out the menu or even crash the game.

These frames are loaded into VRAM next to the teacher's standing frame, but are never triggered in the two scenes he is present.

Large monster sprites located at 0x0f0000. They don't seem to correspond to any in-game designs.

Stored next to the song titles at ROM address 0x45C1A in the Sound Test includes two strings that are inaccessible via selection, neither of which are relevant as the proper credits song is listed as "You got monster". Activating the Game Genie code 1AA-BA9-80A in the sound test will allow them to be selected, but don't seem to play correctly.

All of these test and development-related messages are found within the first test message menu.