Since no video game franchise is complete without one, United Front Games brings us a LittleBigPlanet themed kart racer built on ModNation Racers' engine.

DATA/ROM/CHARACTER contains a handful of costumes that either aren't used or can't be obtained normally.

AVALON_CHAR_0000047F, EVE_CHAR_00000487 and VICTORIA_CHAR_00000400 are costumes of Avalon Centrifuge, Eve Silva Paragorica and Victoria von Bathysphere respectively, which are all characters from LittleBigPlanet 2. These characters are referenced in this game's Story Mode, but their costumes are never given out. Below are all of the icons associated with these costumes.

There are three unused variations of the Hoard characters, being HOARDCHAR_0000040B, HOARDCHAR03_00000550 and HOARDCHAR04_000004FA. While these variants can be seen in the opening FMV and certain tutorial videos, they do not appear anywhere in-game, either in Story Mode or in user-made levels where the Hoard are set to spawn. Below are all the icons associated with these variants.

DATA/ROM/VEHICLE/MAXKART contains files for five unused Karts. Their icons depict recoloured vehicle parts from ModNation Racers, however, the "SMALL" icons either show disembodied wheels, floating steering wheels or are effectively blank images. Attempting to load any of these karts causes the game to crash, likely due to them relying on nonexistent assets.

Models for a cardboard shopping cart can be found in DATA/CREATE/KART/KARTMODELPACKSTREAMING.BIN. There are no models or textures for alternate suspension types.

DATA/CREATE/KART/KARTMODELPACKSTREAMING.BIN contains models for a kart body based on Tag's Kart from ModNation Racers. It can be seen briefly in the game's announcement trailer, used in what appears to be an early version of Craftworld GP. Models exist for all six suspension types.

An ice cream truck kart body can be found in DATA/CREATE/KART/MDOELPACKSTREAMING.BIN. Models exist for every suspension type, though the tank doesn't appear to have an icon associated with it. 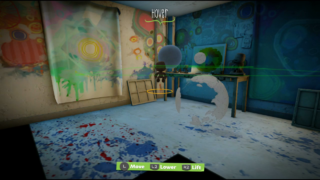 The LBP2 Pod background with all other objects removed from the level.

By entering the Pod level in Create Mode and changing the Background Pano Style to 2, the Pod background from LittleBigPlanet 2 can be seen, albeit with the outer chunks removed to save on resources. Unlike the final Pod background the Earth and Moon are baked into the geometry, though for some reason the Earth's land is separated from the actual planet. The final Pod is much bigger than the room it was originally meant to occupy, suggesting this version was designed with a much smaller Pod in mind.

DATA/UI/ART/RACE/UIARTRACETEXTUREPACK.TEMP.BIN contains early versions of a couple of HUD elements. 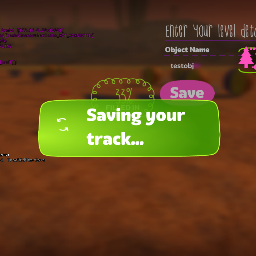 DATA/ROM/OBJECT/TESTOBJ_00000E1A.PNG is a screenshot of a level being saved in an early build of the game, presumably meant for testing something. A 128x128 version also exists in the same directory, labelled TESTOBJ_00000E1A_SMALL.PNG.

Found amongst Pod-related graphics in DATA/UI/ART/POD/TEXTUREPACK_POD.TEMP.BIN is a polaroid with a blue icon of a kart. A similar icon that features a blue Sackperson icon is used for the default player polaroid image, but this kart variation is never used.

Found amongst the PlayStation Eye overlays in DATA/UI/ART/GLOBAL/UIARTGLOBALTEXTUREPACK.TEMP.BIN is a polaroid overlay. While this isn't unused in and of itself, there is an image inside the frame that normally can't be seen due to the inside of the frame being fully transparent. By removing the overlay's transparency in an image editor, a picture of someone in a plastic box - presumably one of the developers - is revealed.

DATA/UI/ART/GLOBAL/UIARTGLOBALTEXTUREPACK.TEMP.BIN contains six red and blue icons that were most likely intended for use on a minimap. They do not appear to fit in with this game's art style.

Found in various TEXTUREPACK files throughout the game is a PlayStation Store icon for ModNation Racers.

Buried within SONYKARTDEFAULT.PCK are five licensed music tracks that are never used anywhere. None of these songs have previews tracks, so it's unknown if they were intended to be given out or if they were simply for testing purposes.

The live version of Remind Me by Röyksopp.

Toccata And Funk In D Minor

Toccata And Funk In D Minor by Walter Murphy.

DATA/MOVIES/INTROMOVIE.BIK is an early version of the live action intro, using the standard Orb of Dreamers music with no stickers or Stephen Fry narration. It also starts with a title card.