Little Nemo: The Dream Master is a video game based on the movie Little Nemo: Adventures in Slumberland, which in turn was based on the American newspaper comic from 1905. Oddly enough, the movie itself didn't come out in the US until 1992, although it was already out in Japan when the game was released. 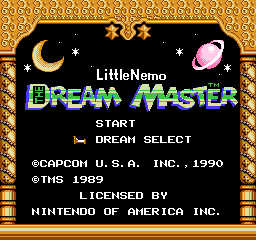 At the title screen, press Up, Select, Left, Right, A, A, B to activate Dream Select mode. Press A once for each level you want to skip, and Start to begin the selected level.

The Japanese title logo is based on the one used in the original Japanese release of the film, while the international logo is completely original and puts more emphasis on the game's subtitle. Though Nemo himself was removed from the title screen, the graphic can still be found in the US and European ROMs. Additionally, some larger stars were added to the background and the corner decorations at the bottom of the screen were removed to fit the extra copyright information.

The US and European versions removed Flip's cigar from both the sprite and portrait.

Smoking gorillas weren't acceptable, either, however the instruction manuals in both America and Europe (where Nintendo published the game) have artwork of the gorilla with cigar. In the game, its lips are still positioned as if it was holding a cigar in its mouth, making its face look rather awkward.

The pattern of the Manta Ray boss is slightly different in the Japanese version.