Looney Tunes: Space Race is quite a fun and unique racing game starring your favorite Looney Tunes characters in dynamic race tracks full of detail, with a funky soundtrack and gadgets to blow up your roommates. The biggest downside is the lack of playable characters.

A list of the game's keyboard/mouse configuration found in CTRLCFG.txt. Despite being called PeripheralConfigDreamcast, the list contains eight AXIS mappings instead of four, with the four directions forming an analog stick.

A group of avatar-like pictures of eight of the nine playable characters can be found in TEXTURES\HUD. One of the most noticeable things is that Porky and Elmer wear their traditional outfits rather than the ones used in the game, and Sam wears his trademark cowboy hat. If we carefully merge the pictures, we soon realize that it forms something like an incomplete group photo. Bugs' avatar doesn't show any sign of where its model was located but Marvin's picture shows a small glimpse of Bugs' glove.

The full picture can actually be seen in the press kit trailer.

There's an early version of the podium seen in the "End Race" cutscenes which is pink, shaped more like a generic podium, and has the game's logo on it. 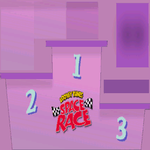