This strange sprite is located near the title screen graphics and some ending graphics. It appears to be a floating island with two heads on it. It was most likely meant to be used in a cutscene.

A chunky-looking copyright stored at the end of the CHR ROM. Later KID-developed NES games contain the company's logo instead. 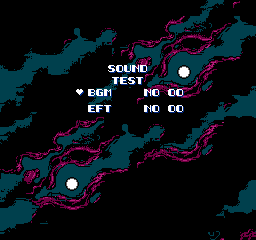 Enter SONG as the password in the US version and enter S0NG in the European version.

The password screen in the US version uses the full alphabet along with a heart symbol, while the European version uses only consonants (minus W, X, Y and Z) and numbers.