Lucky Luke is the first of several video games based on one of Europe's best-selling comic series. 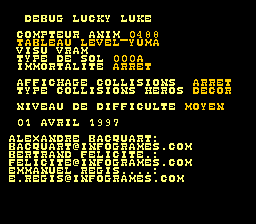 At the first screen that appears when starting the game, press Left, A, L, R, X, holding each button down as you go, or use the Pro Action Replay (PAR) code 7E020302 or 85A99902 to enable a debug mode which you can access during gameplay by pressing Select. 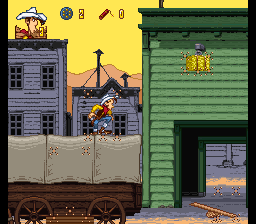 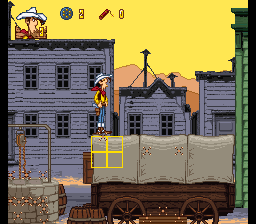 The menu also displays the build date and the email addresses of the three main programmers. Pressing X will return to the game.

With the previous code still active, holding down R on controller 1 will freeze the game (but only if invincibility is disabled.) This was probably used to aid in taking screenshots of the game. 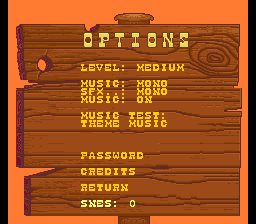 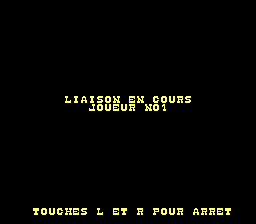 When set to 1 or 2, starting a new game will display this screen, which translates to "link in progress, player no. [1 or 2] - press L and R to stop".

What this actually does is unknown - it may have been used to establish a connection to external development hardware, as there are several error strings in the ROM which may have been output to an external device when testing the game.

Pressing both shoulder buttons simultaneously will cancel the link attempt and the game will continue normally.