Luigi's Mansion: Dark Moon is the sequel to the popular GameCube game Luigi's Mansion. Going for a cartoonier slapstick comedy style this time around, it kicked off the Year of Luigi in ghost-busting style.

Found in RomFS\art\fe folder are two unused debugging screen layouts. To see these in-game, simply replace one of the used layout .data and .dict files. 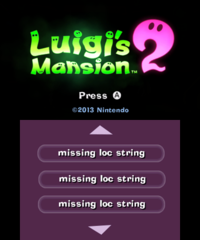 debugselectmissions.data seems to be a layout for a simple menu, containing a list of missions. The mission names don't seem to load. 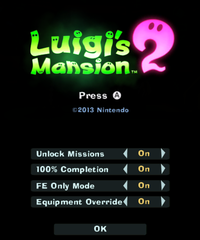 progressiondebug.data appears to be a menu allowing you to set some completion parameters.

To see these in-game, simply replace one of the used cutscene .data and .dict files.

Found in RomFS\art\levels\sandbox\nistest\nis\ridesandboxcamera is an unused script for a cutscene, which consists of some camera movements.
The level that would host this cutscene is gone from the game, so the overworld map was loaded to showcase it.

RomFS\art\levels\bunker\mission00zone is an unused E.Gadd cutscene testing script. The cutscene first loads a sub-script found in RomFS\art\levels\bunker\art\nis\poltergust_upgrade, which shows E.Gadd don a welding mask and tinker with the Poltergust on Luigi's back. The cutscene then proceeds to go through every single Luigi and E.Gadd animation that can be used for the bunker scenes, whilst popping up undefined textboxes.

RomFS\art\levels\bunker\mission307zone is an unused end-of-level cutscene. After Luigi leaves the Pixelshifter, E.Gadd proceeds to say a few sentences and brings up the Parascope map, which indicates that Haunted Towers have been unlocked.

RomFS\art\levels\bunker\mission208zone is yet another unused end-of-level cutscene. The spoils from the mission are sent to the vault, after which E.Gadd says a few undefined sentences.

A complex 3D Maze found in RomFS\art\levels\mansiona\room_treasureroom. Present is a chest, which awards you a modest amount of money, and a spring pad that launches you back to the beginning.

A barely-started bonus challenge found in RomFS\art\levels\mansionb\room_secretroom1. Aside from a textureless platform, it contains one of the Secret Mine teleporters, which crashes if interacted with.

An even more barebones bonus challenge, with only the platform's outer walls modelled. Found in RomFS\art\levels\mansionb\room_secretroomtemplate.

Gloomy Manor and the Secret Mine both have a mission00 folder. Secret Mine's is entirely empty, while Gloomy Manor's appears to contain a Greenie model and references Stage 4's ending cutscene - but neither of those appear in the stage when it's loaded in.

There exists an unused first person mode toggle, which can be mapped to a button. This likely went unused because the game doesn't render a lot outside the screen. This can be reenabled by the following cheat code in the EUR version:

There exists a mode which makes the Dark Light act more like the regular flashlight. It stays on when walking around, and by holding the Dark Light button it can be charged and strobed. The strobing doesn't seem to have any effect on actually revealing objects, however.

The game can be set to restore Luigi's HP to full shortly after he gets hurt. Once the HP reaches 100, the game plays an otherwise-unused sound effect. This was used in the 2011 demo.

Found in RomFS\art\global.data is this texture reading "Convergence Plane" several times over.

Located in \ini are four files which seem to contain settings for the game, as well as general ROM information.

Has what would likely be the last build time and date.

Possibly the most recently used development and debugging software.

Contains the game's "product code" serial (as seen in various places) and the unique ID part of the title ID.

Appears to contain flags used during development of the game for debugging purposes. Unfortunately, it does not work if the flags are set to true, or the comment sign is removed.

Information detailing the gyroscope position can be drawn on the screen by using the following cheat code (EUR version) and pressing the R button:

Information about the current ghost capture can be drawn on the screen by using the following cheat code (EUR version) and attempting to catch a ghost:

Making its way over from Mario Strikers is the Smiler. A small rectangle is drawn in the corner of the screen and gets angry whenever the game starts losing frames. This can be seen in the video below starting at 2:17.

By adding a dist.ini file with certain flags to the RomFS\ini directory, some debugging features can be enabled.

The format of the file follows the convention of user.ini, i.e

If set to true, the game sometimes loads into a glitched titlescreen. "Current: F1" is shown on the bottom screen, while a level seems to be loaded in the background. The game usually crashes not too long after. In the sequel, this is used to load into a Level Select. As such, this likely means it has been dummied out from this game, but not completely. 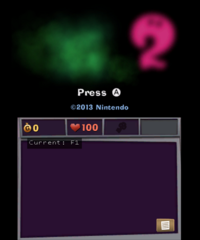 If set to true, the game immediately loads into a level.

If set to a level name (e.g. MansionA, MansionA_SpiderBoss, Bunker, etc...), it loads that level when Skip Frontend is enabled.

If set to a number, it loads that mission of the selected level when Skip Frontend is enabled.

If set to true, all missions get unlocked.

Seems to be some sort of stability test. If set to true, it crashes the game, unless Smoke Test Duration is set to a non-zero value (e.g 190.0) and Skip Frontend is enabled. After loading into Gloomy Manor, a debug string is displayed on the bottom screen for the duration of the test. The game proceeds to warp Luigi around the manor.

Can be set to MansionA, MansionB, MansionC, MansionD or MansionE. If Smoke Test is enabled, the bottom screen map of that mansion will load, the debug string on the bottom screen will print the selected level, but the player will still end up in Gloomy Manor.

Can be set to, for example, German. Allows one to override the game's language.

The following flags are also referenced in the code, but seem to do nothing, or their function is unknown: Net Test Host, Net Test Players, TestStart, Intentionally Fail Assert, Intentionally Crash Game, Smoke Output By Platform, Changelist, AppNumber, BootRegion

The text in the game can contain a {tp} tag, which can be used to control the text print speed. In every single instance of this tag being used in the final game value of 0.01 is used, however others work as well.

The following text in art/fe/english.data is related to debugging. Some of these strings are used in the unused layouts.

The device called the "Pixelator" in the North American version and the "Pixelshifter" in the European version is referred to internally by the game as the "Pixelporter".

The original name actually snuck into the final game text in a single line of dialogue (string ID 9065DC2E), but only in the North American version:

This line can be seen in the game at the end of mission C-2 ("Underground Expedition" in the North American version, "Underground Trek" in the European version).

A few space characters in the game's text have markup explicitly coloring them #FFFCFC (a slight off-white), a color not used for any visible game text (except in the Japanese translation, but hold that thought). Of course, this cannot be seen during gameplay. The colored spaces are marked below (as they appear in the North American version):

The European English version also has colored spaces in the same places. Other translations do not.

The Japanese translation, however, is the only one that uses that font color (#FFFCFC) for any visible text. This only happens in one line (the color is represented below with an underline):

Unrelatedly, some other text in the game includes seemingly redundant font color markup:

Rewriting font color markup as parentheses, the North American text is equivalent to "Why don't you check the (W)((ater Supply) )on the roof?". Since the European text works correctly without the complicated markup, it's a mystery why it is present in the North American version.

The folder containing the ScareScraper-exclusive ghosts is named "streetpass" (\art\streetpass). The game doesn't support StreetPass at all...

The folder containing assets for the ScareScraper rooms is named “terrortower” (\art\levels\terrortower). This may have been an early name for the ScareScraper. Note that Disney owns a theme park attraction called the “Tower of Terror”. Whether or not this was the reason for the name change is unknown.

The game is called LM3DS internally, according to the strings in the executables.