An unused avatar can be found in chara\ch111.dat. It is related to completing an 11th round of VS CPU mode, although there are only 10 rounds in the mode. Data for this avatar can also be found in Lumines Supernova, albeit in a higher resolution. 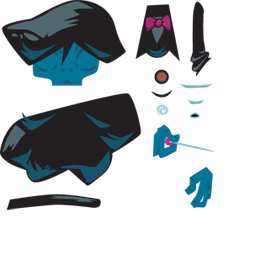 An unused enemy avatar can be found in chara\ch111_cpu.dat. Much like the previous, playable avatar, it is related to an 11th round of VS CPU mode. Data for this avatar can also be found in Lumines Supernova, albeit in a higher resolution.

message/mes_puzzle_jp.dat, in the Japanese release, contains strings for the Puzzle Mode. However, the original American version also has this file, using slightly different text:

The game was given a proper splash image in the Japanese release. In the original American and European releases, it was a still from the game's opening movie.

FLY INTO THE SKY

The skin FLY INTO THE SKY's banner had a typo in the original American and European releases of the game. This was later fixed in the Japanese release.

The Japanese release of Lumines II was heavily trimmed down compared to the original American release, with some of the skins in the Challenge Courses being replaced or completely missing. The order of some skins was changed as well. Below is a list of skins in Challenge Courses, with skins exclusive to a region being in bold, and altered placements being in italics.