The Mac Action Sack compiled six of Bungie's greatest hits: Minotaur, Pathways, Abuse, and the Marathon trilogy. Their newer franchises weren't left out, either: Myth got a demo, Oni got a preview, and the just-announced Halo got an Easter egg...

The "Movie, Images & Music" folder of the Oni preview hides an invisible file: big brains=huge game.jpeg, a photoshopped image of the staff at Bungie West. 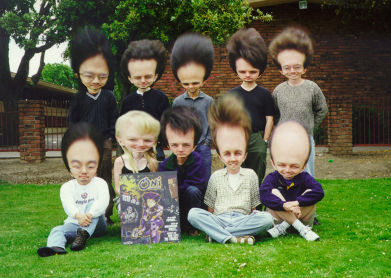 However, it was another secret that grabbed all the buzz: the "Minotaur 7" folder contained three invisible JPEGs of Halo concept art by Shikai Wang. Mac Action Sack was released the same day as the Halo announcement trailer, and just 48 hours later the hidden sketches were helping to melt the servers of barely-opened Halo fansites.