Four unused Stamp items exist in the GMS data. Unclear what they were supposed to be used for, but they may have been related to the Note system which is notably absent from GMS.

These NPCs exist in the data of GMS, but have yet to make an appearance outside of the Japanese version where they originated.

A feature that was exclusive to some Asian versions of the game. If you were playing at a PC Room that had a deal with Nexon, you got access to some training maps that were godly in the early days of the game, as well as alternate versions of weapons that were much stronger and with lower level requirements than their regularly obtainable counterparts. GMS never officially released this and likely never will considering how antiquated it is post Big Bang, but some of it still exists in the data.

The NPCs of this year's Lunar New Year "Land Of Divination" event still exist in the files despite being unused after the event's end in February. 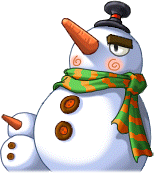 This guy was apparently an exit for an unknown jump quest. 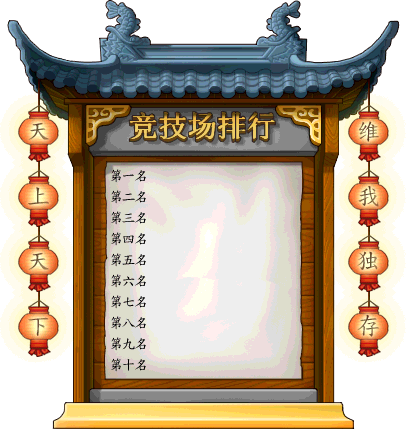 A board that was supposed to display a player's PVP ranking.

A warrior wearing winter clothes over his armor. It's interesting to note that his "stand" animation just refers to the 1st frame of this animation.

A lady applying makeup to herself and looking in a small mirror. This is her "Hand" animation.

A lady holding a box in one hand and raising a small bottle of medicine or drink in her hand.

A female haircutter. This is her "Say" animation.

The "Greet" animation of what I can assume to be a greeter for the area.

During the GMS Beta, certain towns had a Free Market area where players could trade. However when the game officially released these areas were removed, and when the Free Market returned it was condensed into a single set of universal areas that could be accessed from any town, rather than having town specific ones. The original entrance maps are pretty much gone, but the graphics of the rooms were recycled.

In the Korean servers, there was an event area dedicated to the Coca-Cola® company, likely under sponsorship, in an event called CokePLAY. The area never has and most likely never will appear in GMS, but parts of it exist in the data, most notably in monsters and NPCs. There is no map data whatsoever in GMS aside from a background effect and strings referencing the map titles, which are fully localized.

These graphics are from the first version of the UI, which was used in the Korean beta and shortly after release, as well as from the first few Japanese versions. Nexon apparently forgot about Omok and Match Cards when they decided to scrap this UI, and so they use this insanely old style of graphics even today. 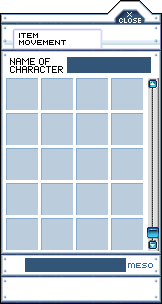 Was likely never used. Unknown what purpose it would have served.

A movement item buttons for the item movement menu.

Buttons that cancel movement of items.

Close buttons from menus and such. 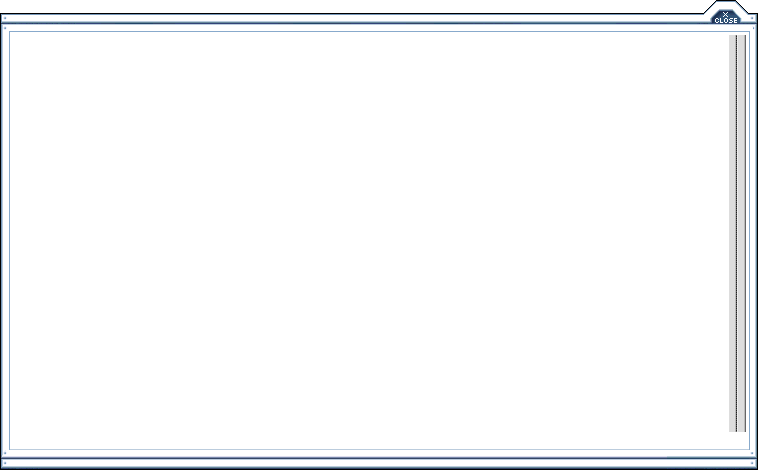 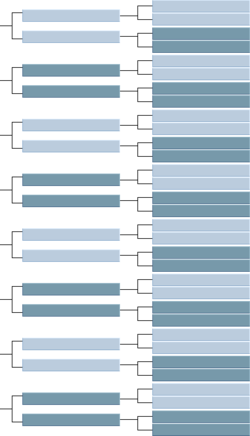 Appears to be a tournament roster.

This used to be displayed in the corner during the GMS beta.

Graphics for a scrapped feature where using a skill would show the name of it above your character. They only exist for up to 2nd job skills, so they were likely removed when the UI was redone, but despite this they've been in the GMS data since launch. Example in-game. 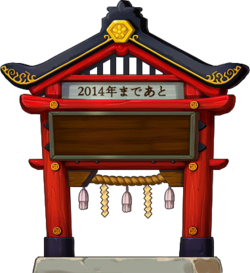 A graphic showing a Torii, presumably an accidental copy over from Japanese Maplestory. The file name indicates it was from a New Years event, this one being from 2014. 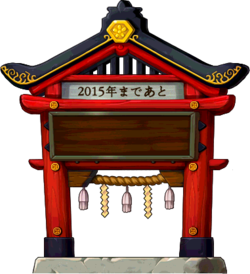 Another Torii graphic, this time for 2015. Compared to the 2014 image, it has some additional detail and does not have any dithering.

Graphics from a promotion for the launch of the Nexon Game Cards in various stores.

A graphic of a Rite Aid storefront with an animated "SALE" sign. It's also the only storefront to feature any animation. It once resided in Amoria with its representative, Alex The Rite Aid Guy. 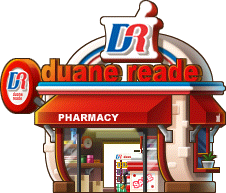 A graphic of a Duane Reade storefront, which once resided in New Leaf City with its representative, Kate The Duane Reade Girl. 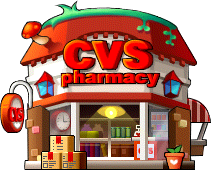 A graphic depicting a CVS Pharmacy storefront, with grass on top? Odd. Once resided in Amoria with its representative, Nicholas The CVS Guy. 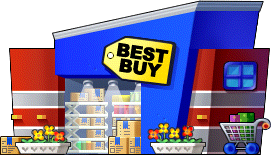 A graphic depicting a boxy Best Buy storefront. Once went with its representative, Jill The Best Buy Girl. 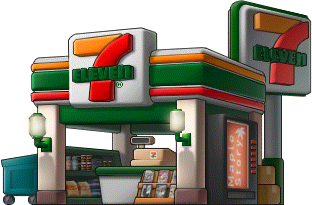 A graphic depicting a boxy little 7-Eleven storefront, even with a little vending machine to the side. It once resided in Henesys with its representative, Barry the 7-Eleven Guy. 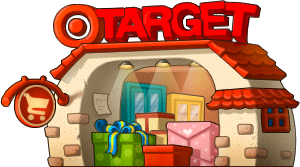 A graphic depicting a small little Target storefront with a large open front design. It once resided in Henesys with its representative, Andy The Target Guy. 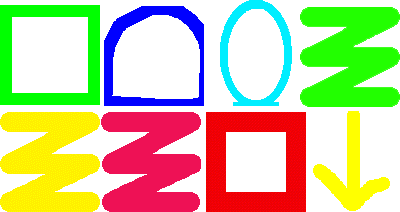 "Caffe Maple" (appears to be) a cross promotion event with the Korean Caffe Bene chain. Despite being used in the Korean version exclusive Flower Violeta(꽃보다 비올레타) zone, some of the files found their way to the international versions.

The logo for the event. 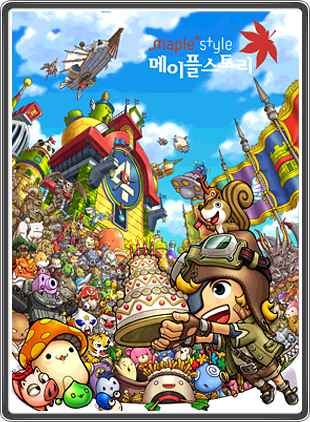 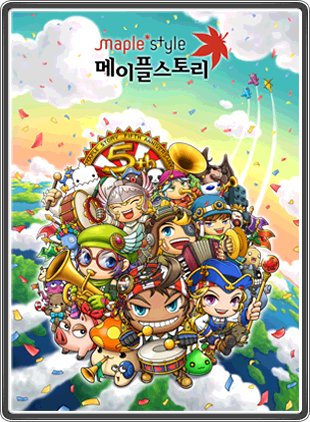 A poster for Maplestory's 5th Anniversary, it's also in Korean. 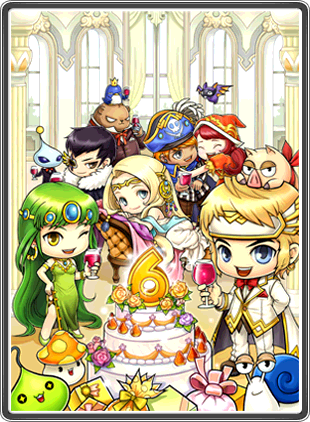 A poster for Maplestory's 6th Anniversary. 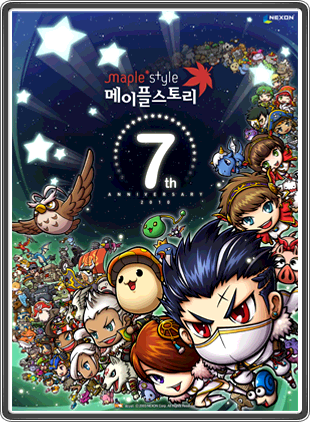 A poster for Maplestory's 7th Anniversary, also in Korean. 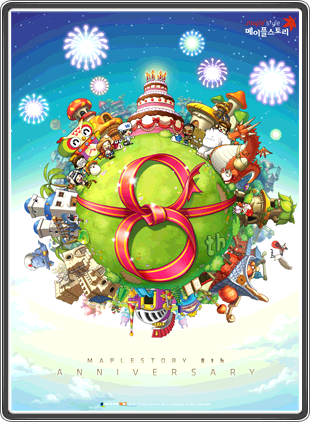 A poster for Maplestory's 8th Anniversary. The main text is English but there's the "MapleStyle" thing in the corner is in Korean, so I don't know. 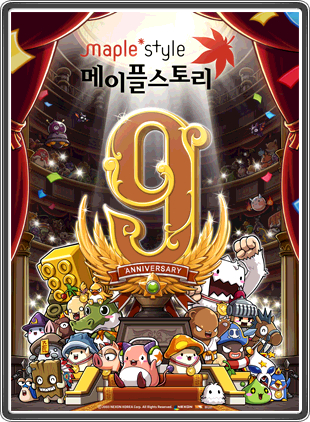 A poster for Maplestory's 9th Anniversary, in Korean again. 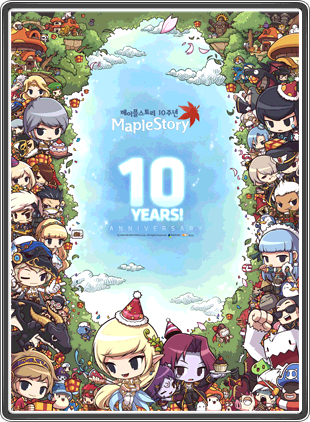 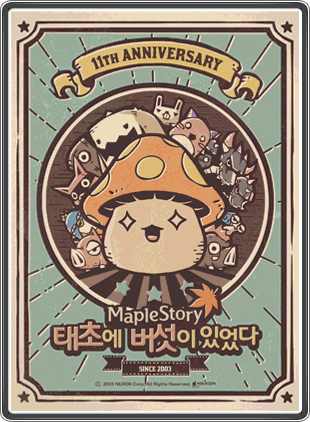 A poster for Maplestory's 11th Anniversary, in Korean as well.

A set of equips specifically for the Game Masters. Normal players cannot obtain them. The hat gives 999 to each stat and the suitcase has an average Weapon Attack of 200. Used to be the best items in the game by a huge margin. Today, not so much...

Job IDs 900 and 910 are a character class specifically for the Game Masters. They are named GM and SuperGM respectively. Almost every skill is a tweaked version of a previously existing skill down to sharing the same graphics. There's lot of overlap between the jobs and some duplicates, and not all of the skills were updated to match modern appearances, giving them that vintage MapleStory feel.

GM Haste: Same effect as the normal Haste thieves have access to, but unlike most GM skills this only works on the caster. Was not updated to match Haste's modern appearance.

Super Dragon Roar: A much stronger version of the skill formerly used by Dragon Knights before the class was reworked as Berserker.

GM Teleport: Same icon and effect as the normal teleport mages have access to, but teleports a greater distance.

Hide: Same icon as the skill Dark Sight for thieves. Makes a GM completely invisible on the map and also unable to be tracked, doesn't expire until manually deactivated.

GM Resurrection: Revives all dead characters on the map. Because this skill existed before 4th jobs, it uses the icon and old graphics for the Shining Ray skill from Priests rather than sharing them with the actual Resurrection skill that Bishops have.

A duplicate of Teleport. Unclear if/how it's different from the other one.

GM Hyper Body: A better version of the Hyper Body skill that Spearmen have. Increases Max HP/MP by 60% for 15 minutes. Uses the old Hyper Body icon and was not updated to match Hyper Body's modern day appearance.

Super Magic Assault: 9999% *chance* to attack 6 enemies 8 times, apparently? The description is a little nonsensical. Uses the icon and graphics for Magic Claw from Magicians.

Did you know? Game Masters can job advance too! But given that almost every skill in this book is a duplicate, it's likely that this isn't used anymore.

Heal+Dispel: Heals and casts Dispel on all characters on the map. Uses the old Dispel icon and was not updated to match Dispel's modern appearance.

Haste (Super): Same as the other Haste, except this one works on everybody in the map!

GM Holy Symbol: 150% exp for 30 minutes for everybody on the map. Uses the old Holy Symbol icon and was not updated to match Holy Symbol's modern appearance.

GM Bless: Uses the same icon and graphics as the Bless clerics have access to. Kind of useless now that they have Admin's Blessing, though.

A duplicate of Hide from the other skillbook. Unclear if/how it's different.

A duplicate of Resurrection from the other skillbook. Unclear if/how it's different.

A duplicate of the crappier Super Dragon Roar from the other skillbook. Exactly the same according to the description.

A duplicate of Hyper Body from the other skillbook. Exactly the same according to the description. 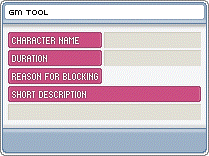 There's graphics for a banning tool in the client. This is notable because the game masters are known to use a different client than the players with text commands for banning and all that jazz, whether or not this still functions despite that is unknown. Graphic was not updated to match current day UI.