The third game in the series. It's a Mario and Sonic crossover...but not the kind the fans wanted. 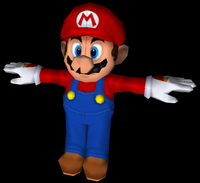 A low-poly version of Mario, found in William_Files/Test.brres, assumed to be used for testing. It has two textures and three animations.

In the main folder is a large file called William.cpk that contains mainly all of the game's files, almost certainly named in honor of the Prince.