An NES bootleg that was sought after for years, Nice Code's Mario Kart is an advanced hack of Nintendo's F-1 Race that only ever appeared on rare Spanish plug & plays. 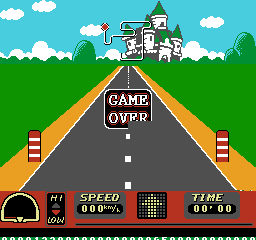 On the title screen, press Right before pressing Start (a sound effect will accompany this) to get an instant game over when the race starts. There is no way to get a game over normally, making this an unused function.

A little Super Mario Bros.-styled Mario in his kart.

The aforementioned unused "Game Over".

An unused "Time Out".