This is a sub-page of Mario Kart DS. 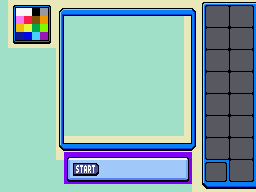 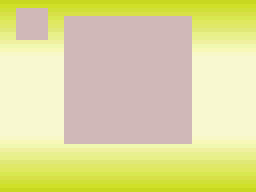 Graphics from an early emblem editor can be found in Edit.carc. The structure is similar to the editor from the Kiosk Demo, though only three templates can be found: a ball, a star, and a heart. The eraser is also absent; instead, there is an unknown icon with a blue square. There was also only a long "START" bar at the bottom of the screen, instead of a "START" and a "SELECT" bar.

It is not possible to get this working in the final game, because the archive is missing files that the final uses. When the missing files are added from the used archive, the graphics won't load correctly since the files are too different; it may have worked on an earlier version of the game, likely a later version than the Kiosk Demo.

Below is a mockup of how the editor might have looked: 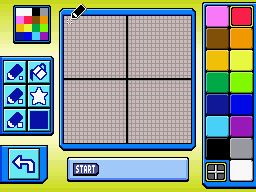 An early version of the question mark for the item box, found inside an early model of the item box. It can be seen in early screenshots.

Two early versions of the red and blue team emblems from VS Mode.

A character selection icon for Shy Guy exists in the game, but Shy Guy is exclusive to Single-Card DS Download play.

However, you can see this icon by using Action Replay code 023CDD40 0000000C to force Player 1 to be Shy Guy and getting a Grand Prix or Time Trial record. No icon for the "Standard SG" kart exists, however.

Press the A Button

This can be found in the files for the title screen, and was used in the Kiosk Demo. It's translated into the other supported languages, so it was probably scrapped late in development.

For some reason, the Italian version of this graphic doesn't have a shadow and is somewhat misaligned.

Most likely used for debugging and such during development.

Found in the files for the results graphics. A simple placeholder for the cup icons.

Another placeholder, used for the emblems on the friends records screen.

Another placeholder, used for the player icons for the battle results screen. It has two sizes and multiple palettes.

An unused graphic of the multiplayer select game screen with only two cells, called select_game_m_single.

The textures of the kart models contain some early designs for emblems, most of which are numbers. They were shown in some early screenshots of the game. It's unknown if these emblems are just placeholders, or if they were going to be in the final version.

At page 35, the cup icons have different renders than the ones from the final game.

Retrieved from "https://tcrf.net/index.php?title=Mario_Kart_DS/Unused_Graphics&oldid=982799"
Categories:
Cleanup > To do
Subpages