This is a sub-page of Mario Kart Wii.

Player Number on the Minimap 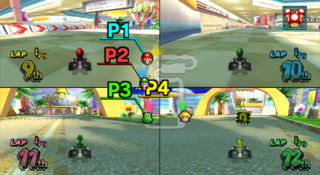 There's a disabled feature in the minimap icons to display a line with the player number on it, similar to Double Dash!!. It is very big, and player icon headlights are rendered on top of it, making it invisible when they overlap. The colors for each player also seem to be in line with the Wii's default, rather than the different format the game uses.

The following Gecko code will enable this feature: 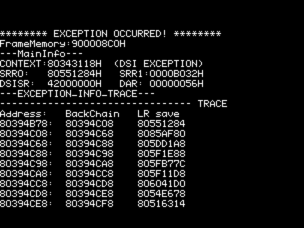 When the game crashes, press the following buttons (in order, from left to right) on the 1st Wii Remote (Vertical) to bring up an exception handler:

Use the D-Pad to scroll.

Mario Kart Wii has two main game loops. The used one is game-specific, but there is an extra unused loop included in the EGG library, shared across multiple games (EGG::ConfigurationData::run(void), which starts at RAM address 0x8024269c in PAL). The following differences are known:

The following Gecko code allows you to play on this unused game loop and enables the performance monitor:

This Gecko code displays the performance monitor without having to access the unused game loop: 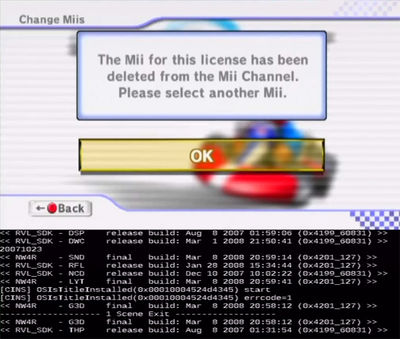 DWC_Log is a method providing logging functionality to the DWC library, which is the library used for online mode (Nintendo WFC). When online, the game outputs messages like "I am New Server!!" to the non-existent console. The developers of the game would have had a cable connected to the console allowing them to view the log on development software. The game also contains debugging messages using the printf method, which are also sent to the non-existent console.

Blue Shells seemed to have been once intended to be held behind the player before they use it. The game contains a list of values for each item that define what the item does when the player uses it; for example, Red Shell uses 0x01, which means that the item is held behind the player and fires when they let go of it. An item like Star would be 0x00, for the game to immediately use the item as the button is pressed. For some odd reason, Blue Shell is listed as 0x01, which means the item should be held behind the player like a red shell, though the game has code to prevent this and instead have the player immediately fire it. Disabling this code reveals that the Blue Shell has an unused animation for being held. There's also an unused action for when a player hits it, which works even if the game is modified so that the blue shell lands on the ground if someone loses it. Here is an AR/Gecko code to enable it:

In one of the routines that sets up items, there is code that scales up the green shells (including their hitbox) to double their size when fired (and also when they're stationary in the ground), but only if the course has defined the Big Pokey object (with ID 0x1AB). This version of the enemy was only used in one competition/tournament, and even then, the only items present there were Bob-Ombs, leaving this functionality unused.

The code that performs these changes starts at 0x80790d1c in RAM (PAL). You can use the following Gecko code to enable this functionality outside of this competition/tournament:

This mode is also present in the unused Mission Mode.

In online matches, players can only get squished if they are hit on their point of view. This is also explains why sometimes, if you're on a Mega Mushroom and hit somebody, they will continue as normal even if in your screen it looks like they've been stomped (because on the other player's screen, they haven't actually been hit).

In the video on the right, a cheat code was used by the opponent to force flipping this unused bit towards the victim. The game then sees this bit as 'Victim has been hit by a Mega Mushroom', and so all of the sudden they get squished.

In the game's code, there is a definition of a BRASD folder inside of the character archive files.

While a similar approach was used for competitions/tournaments, as well as in the unused Mission mode, it uses a different set of files there, none of which have "_Dif" in their filenames. In addition, in multiplayer modes, only the course files ending with "_d.szs" are loaded (the game never loads the original course file nor any "_Dif" files there).

BDOF (Binary Depth Of Field) is a post-effect file that controls effects like focus, sharpness, and blur in tracks.

There is unused code that allows the usage of a secondary BDOF file, named posteffect.bdof_demo. This one has the same format as a normal BDOF file, and it seems to be used only in the course introduction if present.

BFOG and BFOBJ Files (which are meant to control the fog in the courses) are defined in the code, but the game only uses BFG Files instead, probably because they have a simpler format. This may be a remnant from New Super Mario Bros. Wii, as both games share the same EGG library.

Date of creation of ghosts

When players create a Time Trial ghost, the year, month and day it was created is saved in the file (coming from the Wii's settings). This date is never seen in-game, however.

When using a Star or a Mega Mushroom / Thundercloud, your vehicle's base speed will be set to 105 and 95 respectively, ignoring the original speed. However, unused data suggests that the speed increase was not a fixed value originally, but +25% your base speed.

kartCameraParam.bin in /Race/Common.szs has 3 additional duplicated entries for camera entities that are never used. 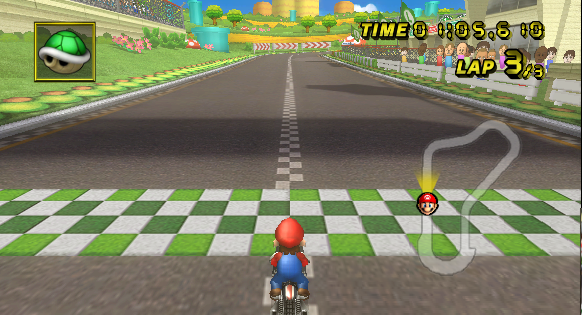 In /Scene/UI/ are a bunch of unused .bin files that seem to be very slightly early versions of the used .bin files (located in /Race/Common.szs), which control several parameters in the game.

This file controls the statistics of the vehicles.

Three "Tilt Strength" values for certain karts have been lowered in the final game.

This file controls the statistics of the characters.

This file controls the position of the camera for the vehicles. 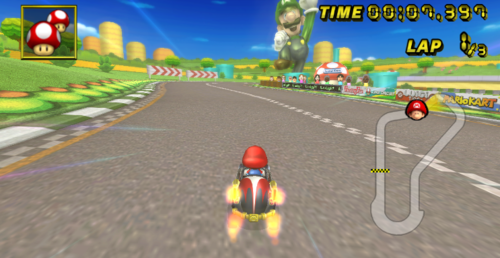 The Mini Beast has unused position data for an extra set of exhaust pipes, placed below the first set, defined in Race/Common.szs/kartPartsDispParam.bin This goes unused because the parameter that tells what type of exhaust pipes should be displayed (for the extra pipes) is -1, meaning "don't display".

ItemSlot.bin contains a set of tables that control the item roulette probabilities. One table that it contains is the "special" table, which has item probabilities used in some specific scenarios (for example, one entry in this table is used in the item boxes in the center of Chain Chomp Wheel, so that the player can always get a Star).

The last four entries of this table are empty and unused.