Mario vs. Donkey Kong 2: March of the Minis

If you ever thought about what Mario vs. Donkey Kong would be like if you were the toys...

...it would apparently be an awful lot like Lemmings. 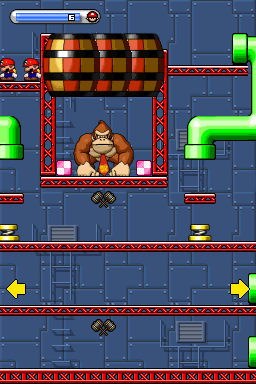 There is an unused third basement boss level, levelHiddenBoss3.mbf. You can play it by swapping one of the used ones (levelHiddenBoss1.mbf or levelHiddenBoss2.mbf) with it. It seems like it is missing from a level table or similar, as setting the "level to transition to" memory value to 0x02 doesn't bring work correctly (it loads a level from another world, but with glitched graphics).

You can't actually do anything in the level, as the Mini Marios are on the top screen - you can't touch them to get them moving. There are some odd actors placements, including possibly unused actors.

Can be found in data\menu\menu_text.bin.

There strings are in the ARM9 binary. Some of these also exist in the Download Play ROM ARM9 binary. The first and second ones exist in the prototype, except in the first one doesn't have " -- out of main Memory!" on the end of it.

A path leftover from development, found in the Download Play ROM's ARM9 binary. The text was corrupted or compressed, so some of the above characters may be missing or incorrect.

There is also a large amount of network-related text here.