Marvel Super Heroes is the second Marvel-licensed fighting game by Capcom. Heroes and villains from various Marvel properties must reclaim the Infinity Gems from Thanos before he can take over the universe, a retelling of the Infinity Gauntlet storyline from the comics.

Doctor Doom and Thanos have an alternate palette for mirror matches like the other characters, but go unused due to their status as bosses. A similar palette for Thanos would later be used in Marvel vs. Capcom 2.

This only works on the Japanese version of the game, and you need the assistance of an arcade operator if using a real Arcade machine. First, enter the Service Menu by pressing the Service Switch (F2 in MAME). The menu will be in Japanese, but go to option #7, then #1, and in the first entry, press the Low Punch button until you get to a phrase that has no numbers. That should be the Free Play option. Then select the bottom entry, then option #4, then option #9 to exit the Service Menu. The game will restart and it should be in Free Play mode. Now, on the "Virtual Audio" screen, hold the Credit Switch (the 1-Player Coin Button, usually the #5 key on emulators), and press the Start button to go to the character selection screen. While still holding the Credit Switch, press the following button combinations at a normal/medium speed. Notes: 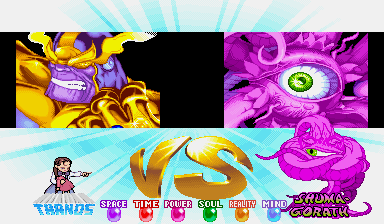 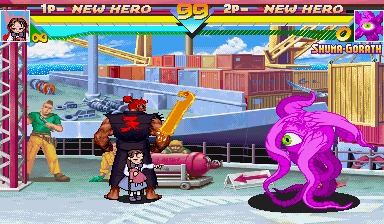 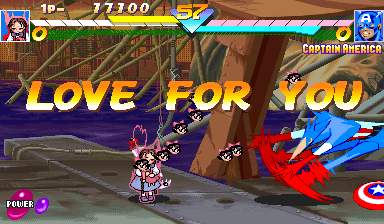 Alongside Dr. Doom and Thanos, Anita (from the Darkstalkers series) also appears as a hidden playable character when the game is set on Free Play. The button combination to select her is: Medium Punch, Low Punch, Left, Low Kick, Medium Kick.

She is seemingly very incomplete: her name is not printed under the lifebar, the announcer never says her name, and she does not have her own artwork or win/pre-boss quotes (she uses Thanos' but with a miscolored logo and Juggernaut's victory theme in the win quote screen), but she does have her name when she wins, as well as at the end of an Auto match when it introduces basic combos. In the PlayStation and Sega Saturn ports (also only selectable in the Japanese versions), she was given a proper "VS" screen portrait.

Her special moves use characters from other Capcom fighting games: Akuma (his sprite being from Super Street Fighter II Turbo) and Mei-Ling (Hsien-Ko's sister, also from Darkstalkers). Her only Super, Love For You, does obscene damage and racks up to 99 hits. She doesn't have her own ending; instead, the credits play twice (beforehand, the heroes in the background are turned to normal from statues, so she is considered a hero character).

Much like with Thanos and Dr. Doom, the Continue screen gameplay tips are in Japanese when losing with her, even in non-Japanese regions. Furthermore, forcing her to be used as an AI-controlled fighter will result in her just standing, often walking to the right when the round begins.

Dr. Doom's little name tag is present during his ending on the Japanese sets. For some reason, it's missing in the international sets.

Revision 951024 of the game's Brazilian set has the text in Spanish, instead of Portuguese. This was corrected in revision 951117, now having the appropriate Portuguese text. This serious mess up previously also happened with the Brazilian set of X-Men: Children of the Atom, but it was never fixed. 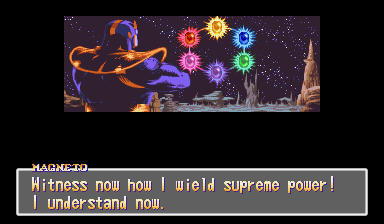 Thanos' two endings incorrectly borrow the text from Magneto's ending. The PlayStation and Sega Saturn ports of the game gave it the correct text, but not the Marvel vs. Capcom: Origins re-release, as it uses the arcade ROMs.