Victor Frankenstein: "You do speak!"
The Creature: "Yes, I speak, and read, and think, and know the ways of men. Explain then, father, why I see a giant orange dinosaur walking around me." 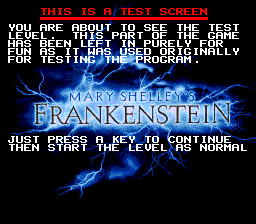 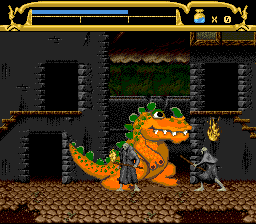 Entering TEST.LEV in the password screen will make the game display the above message. Start the game and you'll appear at the very beginning of Stage 1, but instead of peasants and soldiers, there are two giant orange dinosaurs and two Frankenstein clones.

Both orange dinosaurs walk around the level. The Frankenstein clone on the right side of the screen paces around his half of the screen rapidly, but doesn't do much of anything; however, hitting the left Frankenstein with your stick will make him shoot out dozens of fire, smoke and spark effects. 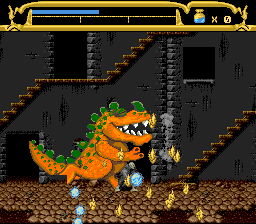 Doing this while the giant dinosaur is close will cause some sprites and the Frankenstein clone to vanish until the effects end. The only way to exit the level is to reset the console.

A list of early credits can be found at 0x2BBB0 and at 0x2C4D7 (in a slightly different form):