Another movie based game from Bits/Sony Imagesoft, which was also released on the Genesis. 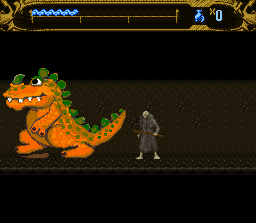 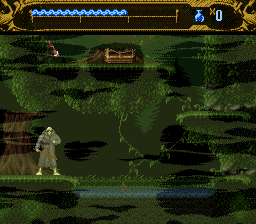 The first effect is in Stage 1, where the giant cartoon dinosaur roams a hallway behind the very first door of the Stage. To access it, at the beginning of the Stage, go to the bottom of the stairs, pull the switch on the wall, and take the elevator up to the door.

The second effect is not so "special" and may be found at Stage 3. At the very beginning of the Stage there is a small water pool. Usually nothing will harm you there. But with the "special" password there will be a barely visible shark fin floating left to right. It may harm you this time.

Sets bit $02 in RAM at $7E172D. During the game press R to skip the current level up to the ending sequence.

Jumps directly to the ending sequence with a credits roll.

The password for the final stage is ZNDRNVSK, but entering any of the following "level change" passwords has the same effect: LVLCNGJJ, LVLCNGKK, LVLCNGLL.

A hint that a few extra levels were planned, but never created...?