Mech Mice was touted as the next big online game from Club Penguin creator, Lance "RocketSnail" Priebe, when it was first unveiled in 2011. Its hype did not last long, however, with few people supporting the turn-based strategy game's "Founders" program and sticking around for its official release in October 2013. Eclipsed by a first-person shooter spinoff unveiled just two months later, it was renamed Mech Mice Tactics and made free-to-play in early 2014, being declared a "failed game" afterwards.

A number of unused characters are present in the game's files, with varying levels of completion. Most of them were meant to debut in the game's third chapter, but never saw the light of day as the game's development was halted before that could happen. 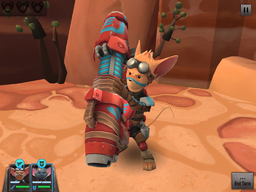 The first hero unit of Chapter 3 would be the Bazooka Grunt, a bazooka-wielding character with long-range attacks and medium durability. His special ability is the "Bazooka Launch," a fancier bazooka shot that's supposed to deal splash damage but instead freezes the ongoing game, effectively forcing a restart. 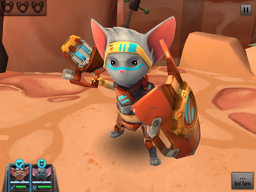 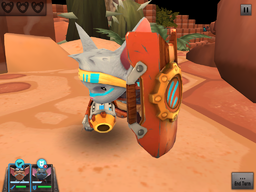 The second hero unit would be the Shield Grunt, a character with short-range attacks and high durability. Her main special ability is "Defensive Stance," which allows her to use the shield to absorb part of the damage that would've been dealt by enemies. A secondary special ability, interestingly not assigned to the unit by default, is "Shield Bash," in which she uses the shield as a melee weapon of medium damage. 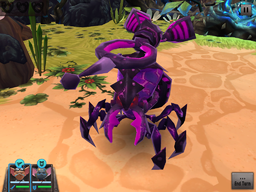 This enemy unit is a variation of the ranged Medium Bug which has been affected by the power of the Shard, stolen by Queen Termina during Chapter 1. The model was recycled as that chapter's mini-boss, Frenzy, albeit in bigger proportions and with added electric particle effects. The unit itself is mostly functional, with its only issues being a non-existent health bar and a rather odd destruction animation. 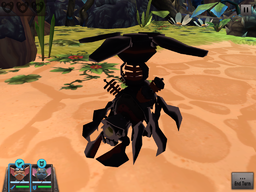 The first unused Chapter 3 enemy bug present in the game's assets is the Prowler Bug. It looks much like an ordinary Small Bug except that, instead of a gun, it has a part that resembles rotor blades of sorts. Despite this, it is treated as a ground unit like every other bug. This unit, as well as the other unused enemies below, has no attack animation, resulting in a frozen game if such an order is issued. 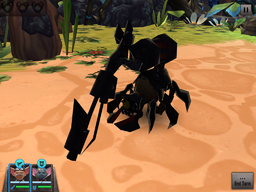 The second unused bug, the Repair Bug, carries a large soldering iron that would presumably be used as its weapon. 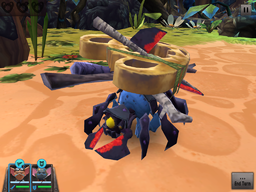 The Scavenger Bug is the third regular bug left unused. Unlike the previous two, it doesn't seem to carry any weapons, instead having different objects tied to its back – including branches, dead bug parts and a Treasure Token. 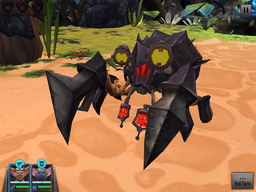 The game's intended third mini-boss would be the Repair Mini-Boss. This unit has no stats defined, hardlocking the game if selected through the Adventure Mode character selection menu via memory manipulation. 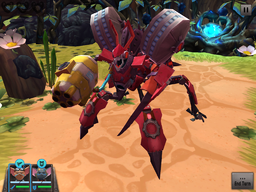 The main boss of Chapter 3, this is a reformed version of Queen Termina – originally destroyed at the end of Chapter 1 – using Mech Mice technology. Parts of at least three different mouse unit classes, coincidentally the tankiest of the game, can be seen here, but their impact on this unit's combat power is unknown as it doesn't have defined stats just like the Repair Mini-Boss. 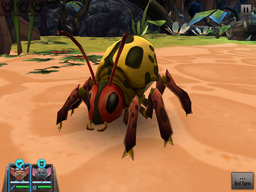 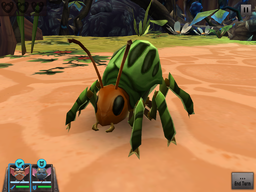 NPC units – Organic Bugs and Villagers – are assigned to the neutral player by default, meaning they cannot be hurt and shouldn't interact with objects like healing flowers. Despite this, animations for such actions exist for these units and may be seen by changing unit ownership or swapping character resources in memory.

A mock-up of the briefing intro of "The Fall of Beta Squad" exists among the intersitial graphics used by that level. This version features different placement for the units' portraits and even includes catchphrases not seen in the used image, along with differing fonts for certain text elements.

A number of portraits for generic non-hero versions of mouse units exist, none of which are ever used. The different dimensions of some and style suggest they were early additions to the game.

Portraits exist for the unreleased Bazooka and Shield Grunts, with three facial expressions for each unit. Along with these, alternate expressions for the Medic and Commander heroes exist, but go unused as these characters are not featured in any Story Mode levels at all.

NPC mice appear in the preview level "The Fall of Beta Squad," but only the female villager's secondary portrait is ever used. Older versions of all four portraits exist alongside the normal ones, with slightly different cropping and background color.

Most bug units have portraits of their own, but the only one that sees any use is that of the Small Bug, obtainable by the player during "Hold the Line." These would've been seen upon use of the Engineer's "Tamper" ability, had it not been left unused too.

Like the buttons above, these would've been used for the Shield Grunt's "Defensive Stance" ability.

The default special ability buttons for when an invalid sprite name is referenced. No normally playable levels feature this, with its most notable appearance being in the "Special Ability Test" scenario, where the also unused "Tamper" and "Shield Bash" abilities are available.

Icons for the unused Bazooka and Shield Grunt classes.