Mega Man 4 is the first Mega Man game to have someone other than Dr. Wily as the final boss! 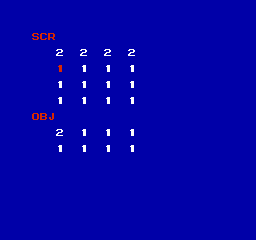 In all versions, the Game Genie code PAEAPEGE activates a palette editor, similar to the one seen in Mega Man 5. Unfortunately, it's currently unknown where this code is actually supposed to be called from.

In Toad Man's stage, if you use a walk-through-walls code or edit the stage and move to the right side of the room just before the first Escaroo (room $0F, in the stage data), there is a completely empty corridor that's two screens wide (rooms $18 and $19) and has no exits. While a number of games – including this one – house empty screens or screens filled with junk data, they're generally left unlinked in their stage. Given this game's nature of having side-areas and detours, it seems likely that the black corridor was going to be one such side-area, but was discarded before release.

This sprite block is a duplicate of a background block, located in the same sprite bank as the switch from Drill Man stage. While the background version of this block is used all over the stage, the sprite version isn't used. Furthermore, there is a variant of the switch which is also unused: the switch that is found in the stage changes a background palette to make some background areas "appear", what the unused variant does is change a sprite palette to the same values as those used by the background version of this block. In other words, these two things go together: they had meant for a variant of the switch to make this sprite block appear. 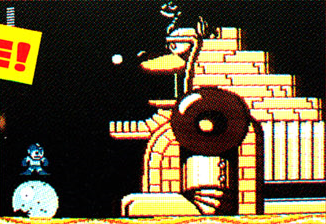 Found near the graphics for the minibosses are this odd ring. It bears a resemblance to the Ringring enemies that populate the rest of the stage, suggesting that this may be an early version of those enemies.

A sprite exists within Dive Man's graphics for his shoulders. In the final game, Mega Man's bubble graphic is erroneously used in place of this.

A robot based on a sea lion. Intended for use in Dive Man's stage, it would've tossed the bomb it carried at Mega Man and swim off.

Located near the graphics for the Moby miniboss is this odd canister sprite. Its purpose is unknown.

An alternate, slightly thinner version of Skull Man's buster exists within his graphics.

Unused sprites of fire exhaust for the Mothraya boss. It would've been placed under its giant jetpac tanks, explaining why it was able to stay afloat.

A sprite exists for Kalinka blinking.

It appears that Dr. Cossack was supposed to have a proper talking animation.

There exists an alternate version of Dr. Wily's trademark eyebrow wiggling taunt, as well as a pointing and talking animation much like with Dr. Cossack. The former sprite ended up being used in Mega Man 5.

A bizarre unused telescope or plunger enemy with a flashing light in the middle. Assumedly, it would extend whenever Mega Man got close and its flashing light is its weak spot.

A wheeled turret on extended legs.

Assorted background tiles that are never loaded. They seem to be labeled "B1".

The copyright was (once again) moved to the beginning of the game's boot up.

In the Japanese version, the Cossack Catcher starts moving earlier.