Mega Man 9 is a lovingly-crafted throwback to the glory days of the series, with a plot which is a flimsy excuse for Dr. Wily to stir up trouble again and for Mega Man to go fight a new horde of Robot Masters (notably including Splash Woman, the first female Robot Master in the series). All this, with graphics that would be at home on the NES.

This game and the sequel wouldn't be rereleased on a newer console until 2018.

Mega Man and Proto Man have throwing animations like the ones used by Mega Man in the first four NES games, but none of the weapons in this game can be thrown. However, both sets of sprites, including Proto Man's, would later on be used for the Rebound Striker weapon in Mega Man 10.

What appears to be a skateboarding robot. Interestingly, there is an animation for the robot to fall off the board, an action rather unusual for the Mega Man series (usually, the pilot is destroyed and the vehicle remains).

A squirrel-like robot that appears to be able to fly or fire with its tail. 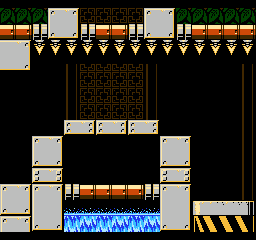 One unused room can be found in Concrete Man's stage data. The 2x1 blocks on the walls that form a dome over another platform are fake walls that can be slid through. This suggests that either Mega Man was originally going to be able to slide, or this room was already made with Proto Man's slide ability in mind.

As Dr. Light is known as Dr. Right in Japan, the emblem that appears in the boss doors of the first eight stages uses an "R" in Japan and an "L" elsewhere.

For some reason, the song "We're The Robots" for Dr. Wily's Stage 2 has different instrumentation between the Wii/PS3 and Xbox 360 versions. The official soundtrack CD from Capcom matches the 360 version. Mega Man Legacy Collection 2 also uses the 360 version, which would suggest that the port of Mega Man 9 included in the aforementioned collection is the latter version.

Similar differences are applied in Concrete Man and Wily Machine.