Megablast could have been a Gigablast if they actually finished the thing. What we're left with is a rushed shoot 'em up with a strange difficulty curve in desperate need of polish, they don't even hide the fact that the player in the gameplay demos has invincibility on! Nice music, though. 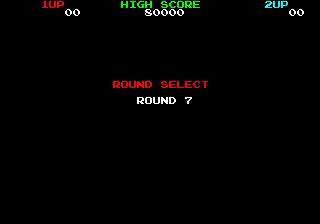 This game features the Taito Code: 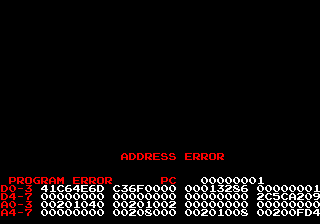 This game has a basic crash handler that displays the exception name and the values of the program counter and data/address registers at the time of the crash. To see it, just crash the game. Easy, right?

A handful of other debug functions remain in the game. Put the following code in MAME's megablst.xml cheat file (Or in the cheat file of any of the other Megablast sets) to replace the default service test with one of the functions below. 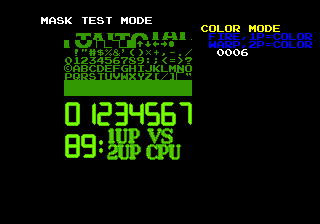 Press 1P Button 1 or 1P Button 2 to select a different palette. The palette counter maxes out at 3F. 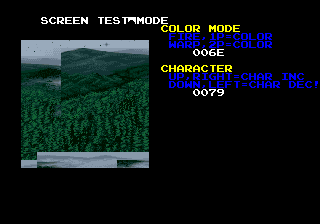 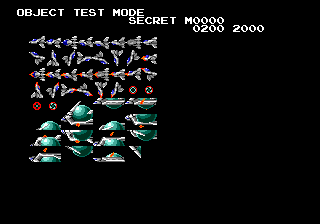 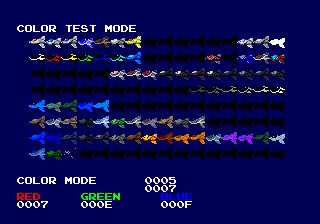 This allows the user to verify and modify color values. Doesn't quite work the way it did in Final Blow, and seems to have broken at some point; only the first color of the first object palette can ever be changed, and only the Blue value effects that color.

Put this code in MAME's megablst.xml cheat file to change the first enemy in Round 1 to an unused object: 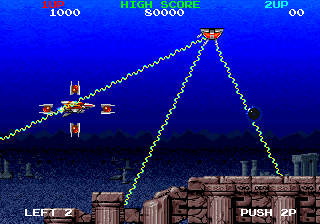 This lightning spinner will, well, spin in place until it's hit by one of the players' projectiles. Then, it turns red and fires three electric blasts.

It's close to being finished, but the electric blasts glitch up at points and don't harm the player. 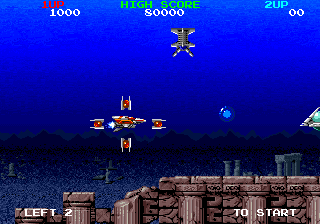 A different lightning shooting device. Unlike the spinner, this one is only half-coded, meaning it doesn't shoot anything. Setting the subtype to 01 will change it from being ceiling-based to floor-based.

Animations for the lightning shooter charging up and the actual lightning go unused. 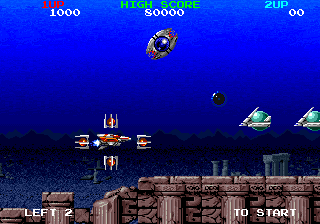 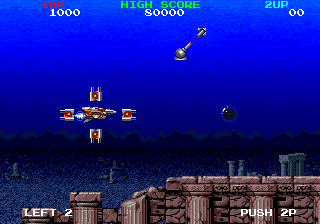 Objects that are meant to be used in tandem: 0C and 0E are the bases (Facing left and right respectively), and 0D and 0F are the latches. Both are destructible.

This is what the objects look like when assembled properly. Note that the animation of the destroyed latches isn't used, because the latches simply explode like any other enemy. 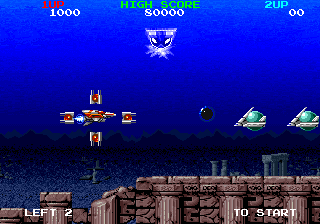 Yet another lightning-based enemy! The orb itself is using the wrong palette (03, the same color as the beam, instead of 02, the main enemy palette), and like object 0B, this is half-finished and doesn't shoot anything.

The shock orb's idle animations and electric blasts can be seen in the sprite graphics ROM. 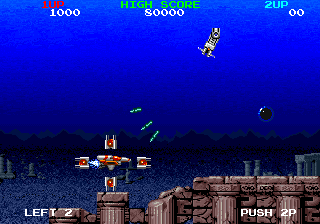 A missile launcher that would hang from the ceiling. This object is actually totally finished; it tracks the player's position, then shoots a missile that splits into three missiles. The missiles are properly coded and the player will lose a life if hit by one.

The missile launcher has a 180-degree range of movement. That thing on the right is the missile burst graphic.

Code for a round select menu (different from the Taito Code round select - this would've been accessible by default) is left in the game, though the FG/BG drawing subroutines for this menu don't seem to work anymore. Put this code in MAME's megablst.xml cheat file to re-enable what's left of the menu: 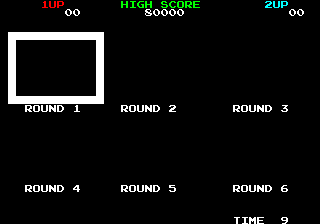 Most of the code for this menu seems to be broken: The player is able to move the cursor, but won't be able to select a round, and if the timer reaches 0, they'll be sent to a blank Round 0.

This bit of text (the only Japanese text in the game) explains how the menu would work and why Rounds 7 and 8 aren't on the menu. The tilemap for this starts at 0x28006 in the main ROM, though each character is defined separately, so the exact formatting of this text is unknown.

These are the stage icons that should be displayed on the menu. These icons and this menu seem to have been abandoned before the stage themes were changed -- which is why most of the palettes no longer match, particularly in Round 6 -- and before Rounds 2 and 6 swapped level slots. Tilemaps for these icons start at 0x2952A in the main CPU.

Every weapon starts out at level 1, but there's code and graphics in the game for level 0 weapons (except homing). Put this code in megablst.xml file to set weapon levels to 0: 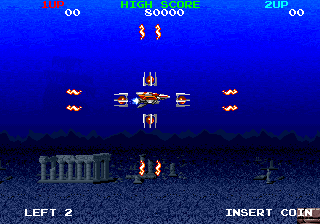 Level 0 weapons are only half as strong as level 1 weapons. It's unclear if the weapons were intended to start off at level 0, or if there was going to be some kind of power-down item that would degrade the player's weapons.

Tilemap: N/A
The graphics for Final Blow's timer and player markers are still in the character graphics ROM. Note that these graphics take up half of that ROM!

Tilemap: 0x2823A
The game uses larger destructible blocks throughout the game, but this 16x16 block is never used.

Speaking of those larger blocks, they're actually glitched. The first 8x8 tile in each is incorrectly flipped horizontally, while the three adjacent tiles are accidentally flipped vertically. The cracked versions of these blocks match the corrected designs seen here.

Tilemaps: 0x3B8D0 (Round 2), 0x391AC (Round 5), 0x30F28 (Round 8)
While rounds, 2, 5, and 8 have no land to speak of in the final game, full tilesets were drawn for all three rounds. The Forest stage tileset has grass-topped rocks, the Iceberg stage is appropriately glacial, and the Space stage is of a barren moon surface.

It's not clear what they were meant for, though. Maybe a form of parallax scrolling during boss fights?

Tilemap: 0x28656
Graphics for a pillar that the player would have to get through before it closed itself out. Probably not the right palette, but it's the closest one in the game.

Tilemaps: 0x28C3A (Splash), 0x28E9A (Water Line)
Unused water line and splash animations. This would fit in well with the more aquatic stage icons seen in the unused Round Select.

Tilemap: 0x2852A
Looks a lot like the early Round 7 design seen above, but the tilemap for this is defined separately.

Tilemap: 0x2912A
Another design for a destructible block. Instead of disseminating, this one crumples up like notebook paper. Also includes 8x8 versions of the same block design.

Tilemaps: 0x29AE2 (Spaceship), 0x29C96 (Explosion)
Graphics for an unused cutscene. Given that it takes place in space, this was probably meant to be seen after defeating the final boss. Palette doesn't seem to be in the ROM anymore, so this is just the best guess based on the player ship palette. The ship's pods seen here have a design that's not used in the actual game, as seen below.

Tilemap: 0x71050
Three different versions of a respawning animation, each with a different ship design. The final design has no such animation and simply blinks white.

Tilemap: 0x71184
What might be the original design of the player's weapon pods, the design on the right can be seen illustrated in the game's flyers. Seems that early on, the pods would visibly grow as they got powered up, whereas in the final game they're always the same size. This design is also lacking the red crystal found in all of the final game's pods.

Tilemap: 0x70DB0
An unused sixth pod design. This might have been meant for the green device pack before it was turned into a simple shield.

Tilemaps: 0x70E10, 0x70E70, 0x70ED0, 0x70F30, 0x70F90, 0x70FF0
There are unique animations for the player's pods transforming into different pods. This includes all six designs and all four orientations. That's a lot of unused frames! In the final game, the pods transform instantly after the player collects one of the device packs.

Tilemap: 0x70044
The small fighter planes have unused firing frames. In the final game, they can never fire, which considering how many of these appear on-screen at once, is an act of mercy.

Tilemap: 0x70028
The planes also have unused turning frames, but in the final game they don't turn, but spin.

Tilemap: 0x70116
The orb shooters also have an unused firing animation, though, unlike the fighter planes, they still shoot at the player in-game.

Tilemaps: 0x71882 (Small), 0x71892 (Medium), 0x718BA (Large)
Disappearing blocks in small, medium, and grande. Uses palette 5A, which isn't used by anything else in the game. Given the style of the blocks, it's likely they would have appeared in Round 7.

Tilemaps: 0x71F44 (Claw), 0x72084 (Chain)
A metallic claw that would presumably grab the player, possibly lethally. This would be attached to a chain, the links of which have an impressive number of animation frames.

Tilemap: 0x721C4
There's also a larger claw that wouldn't be attached to a chain.

Tilemap: 0x74F62 (Left), 75022 (Right)
Lovelorn's central parts have four different damaged variants, none of which ever show up in-game.

Tilemap: 0x740F2
There are sprites in the game for individual parts of Infinitely Great, but it only appears as a single unit in the final game. There might have been plans for the ship to split apart like the Round 6 boss, Cracker.

Tilemap: 0x74952 (Top), 0x749A6 (Bottom)
Wonder H's cores have a unique shattering animation, but in the released game, they just explode out of existence instead.

Tilemap: 0x73094
The Round 5 boss, Flying Medusa, had some major changes done at some point in development. The original concept for the boss had a single dragon that would fly in and out of a mechanical asteroid, while in the final game, there are three dragons attached to a metallic base.

Tilemap: 0x7313E
The asteroid has its own tilemap that includes several patch sprites to properly hide the dragon when it passes through.

Tilemap: 0x73B90 (Claws, Intact) 0x73DB0 (Claws, Destroyed), 0x73598 (Tail, Intact) 0x738F8 (Tail, Destroyed)
There are also arm and tail parts with both intact and destroyed variants. Like in the final game, the player would have to destroy each part of the dragon to completely defeat it.

...which are also unused! The game uses the older, off-model heads instead of the improved sprites.

Tilemap: 0x72E72 (Left) 0x72F38 (Right)
Cracker's guns have firing animations that are never used. Actually, the projectiles that Cracker spawns don't seem to come from its guns at all, but from the center of its body.

Tilemap: 0x75E2E
Only two of Inorganic Soldier's cannons are seen in-game: The chest cannon and the leg cannon. The third cannon is unused and would have appeared in the...crotchal region. Yep.

Tilemap: 0x75EA8 (Chest), 0x75CB0 (Legs)
For some reason, the chest and leg cannons always appear broken and these intact versions are never used.

This is how Inorganic Soldier would look fully intact. It's a little obscene.

Tilemap: N/A (All)
At the tail end of the enemy graphics bank is Green Coronatus from Darius! No palette for this (or subsequent graphics) exists in the ROM, and there's no tilemap for any of these objects, so it's unclear if these were just test graphics or if they really planned on having it appear as a cameo boss.

...as are its projectiles. Note that these graphics are stored separately from each other in Darius while in this game they're all grouped together.

This also includes the replicating orbs that appear before the bosses in Darius, the purple-and-orange explosions, and red fireballs, which aren't actually used in the Green Coronatus fight but are used in other boss fights.

The word at address 0x7FFFE in the main CPU controls the title screen's publisher information. There are five different publishers, but the above two are unused.

Place the following code in MAME's megablst.xml cheat file to switch between publishers:

Please note: The Romstar and Phoenix values have to be toggled after the game is done booting up, or the system will return a coin error.