Menace Beach tells the heartwarming tale of a boy who must defeat ninjas, clowns, Elvis impersonators, and other dangerous foes to save his kidnapped girlfriend – all while riding a skateboard.

Four years later, Wisdom Tree dug up the game and reskinned it to make the Christian-themed Sunday Funday, and also adding another game and karaoke for some reason.

Menace Beach was supposed to have a jet ski bonus level but it got cut from the final game. However, graphics for Scooter on the jet ski as well as graphics for the background, water and points still remain within the ROM. 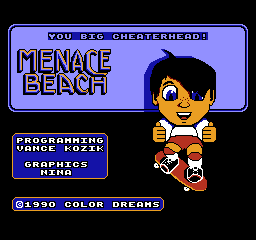 There are two different ways to trigger this cheat.

White parts of the screen should flash red every time you press the correct button (except first Left). A sound will play if the code is entered correctly. Finally, press B to trigger the cheat and the message "YOU BIG CHEATERHEAD!" appears and another sound will play.

Now you can skip the level you're in by pressing B + Select during the game.

Start a new game, then press Up + A + B on Controller 1 and Up on Controller 2 at the same time. If done correctly, you will be sent back to the title screen. Like above, press B + Select during the game to skip levels. 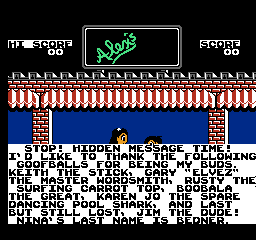 Complete the game (or just use the level skip cheat) then, when the ending animation sequence ends and the message "PRESS A TO REPLAY SCREEN, PRESS START TO RESTART GAME" appears, press and hold Down + Left + Select.

While holding these buttons, a sound will play 10 times, then 5 times in row. Immediately, the message will appear at the bottom of the screen.

In Sunday Funday, two extra programs are included; Fishfall, which is a released version of Roger Deforest's Free Fall, and 4Him The Ride, a karaoke of the song "The Ride" by Christian pop band 4Him. In Free Fall, there are more credits than Fishfall.

It is unknown who Debbie is, but Vance is Vance Kozik, who also programmed Menace Beach.